'The need is so great': Number of people lining up for Bear Clan food donations skyrockets 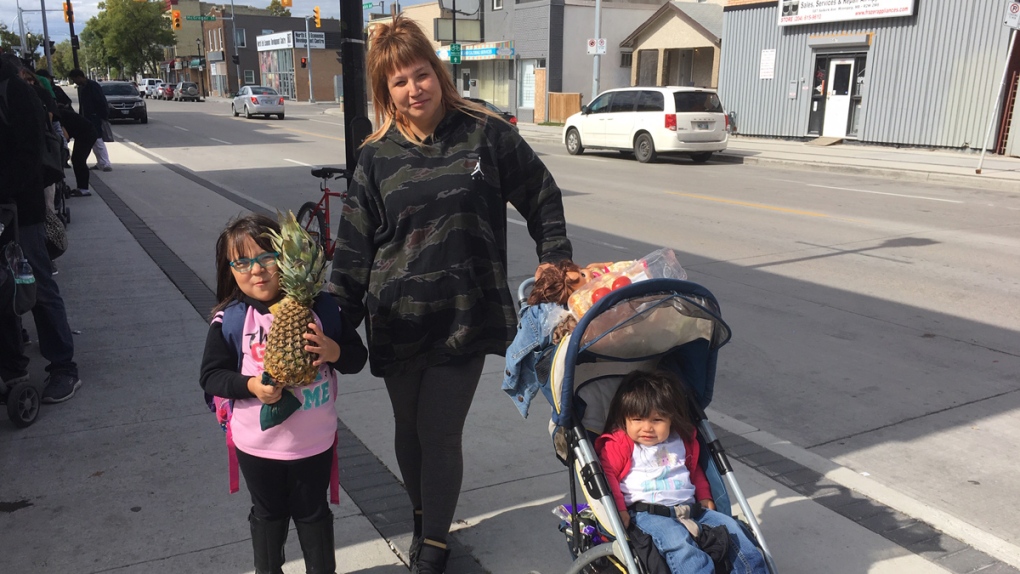 There are signs in Winnipeg the number of families in need of food, especially fresh produce is skyrocketing.

The Bear Clan Patrol, a North End community organization that began handing out donations on a casual basis in January is getting ready to open its doors to people seven days a week.

Executive Director James Favel said in January the group started off helping around 50 to 75 people sporadically, on days the group received donations.

This week food was handed out to nearly 1,500 people at ‘The Den’ on Selkirk Avenue, and one day welcomed a new record high of 424 people to its drop-in program.

“It’s growing beyond anything I ever imagined,” said Favel.

Saturday afternoon, a long line of men, women and children stood outside waiting for the Bear Clan Patrol’s doors to open.

Inside, there was a mountain of bagels, buns and loaves of bread piled on a large table, and shelves were stacked with muffins, along with a colourful array of fruit and vegetables, everything from asparagus to peppers, pineapples and berries.

Favel said some meats have also started being donated, which led the group to purchase a refrigerated truck.

He said the spike in need is partly due to a rise in number of grocery stores and bakeries around the city learning about the program and deciding to donate food.

“The need is so great,” Favel said.

Barriers to fresh food in the community

Favel said there are barriers in the community preventing some people from going to food banks and other social services that distribute food to the poor.

“With food banks typically, you can go once a week, you have to make an appointment, bring IDs. We have none of those requirements here. Come as you are. Come as much as you like, as much as you need,” said Favel.

He said there are some organizations that require people to attend a sermon before food is distributed, and some people don’t want to spend money on bus fare to pick up food.

Favel said the Bear Clan Patrol only gives a small portion of food per person, but it’s enough to carry them over for the day, and if people want to come back the next day, they are welcome.

“I don’t mind supplementing their incomes in this way, allowing them to spend their money on more needed things like transportation and things like that, so they can have good colourful, wholesome produce,” said Favel.

“Being able to contribute back to the community in this capacity is fantastic. I’m thrilled to be part of it.”

“Fruit is so expensive, especially with growing kids,” said Kakekayash.

Her daughter Kayleigh picked up a pineapple. “It’s my favourite,” she said.

Kakekayash said the quality of food at the drop-in is good and helps prevent her daughter from asking about junk food.

William Halton is new to the drop-in. He started coming at the beginning of September after the cost of rent and grocery shopping became too tight.

“I just can’t make ends meet on the welfare. I have got an injured back so I can’t have a full time job. This is one of the ways I can treat myself to the foods I can’t afford,” said Halton.

Some of those items include pure honey, mixed salads and oranges.

To help the poor, Halton would like to see low income earners exempt from taxes on more items.

Gordon Batenchuk, 72, is a retired teacher.

“The food is wonderful and the people are good to us,” said Batenchuk.

He said he can afford to buy food at the store, but lives alone and enjoys the social interaction. He also said he gives some of the food to people in need in his community.