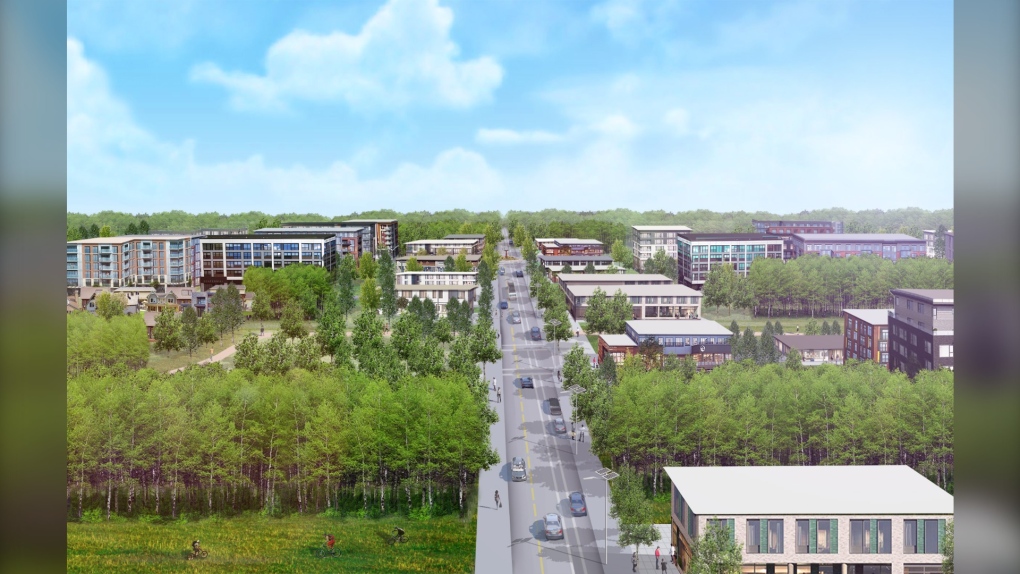 A rendering of the Selkirk West End Concept Plan. (Source: City of Selkirk)

WINNIPEG -- The City of Selkirk unveiled its West End Concept Plan on Wednesday, which includes the construction of thousands of new housing units.

Last year, Selkirk bought 326.5 acres of land in the city’s West End – the largest piece of land the city ever purchased. Now city council has approved a plan to make sure development in this area aligns with the city’s strategic plan.

The concept plan for this area includes: 5,000 new housing units, a mixed-use urban village, 90 acres of park space, and a 1.5 kilometre-long water feature.

In a news release, Mayor Larry Johannson said this development is an exciting step forward.

“It’s a long-term plan for the city’s West End,” he said.

“It goes hand-in-hand with our Strategic Plan and we know that the Strategic Plan was guided by the citizens of Selkirk, and that’s important to us.”

According to Tim Feduniw, director of sustainable economic development, the 5,000 new homes will be built over an extended period of time, adding it has the ability to double Selkirk’s population.

“The way the plan is set up is really creative. The overall densification of the area averages 15 units per acre, and we’re maintaining and even enhancing some of the existing treed areas, which really ties in with our Climate Change Adaptation Strategy and our commitment to the city’s urban canopy.”

Feduniw noted another exciting part of the plan is the 90 acres of park space.

“Ninety acres is an extraordinary amount of land for a park and the water feature provides opportunities to possibly partner with recreational associations, and those talks have already started,” he said.

CAO Duane Nicol said the vision behind this concept plan is to use the best practices in urban planning and community development in order to build a walkable neighbourhood that improves the quality of life for Selkirk’s residents.

“This is really a fulfillment of the biggest portions of our Strategic Plan,” Nicol said.

“We’re taking better control of our economic destiny, encouraging responsible land use aligned with the community’s vision, better management of our infrastructure assets, continued development of our natural features and outdoor spaces, clear intentions for future development….and I could go on.”

The concept plan will be implemented in phases, with opportunities for public input.