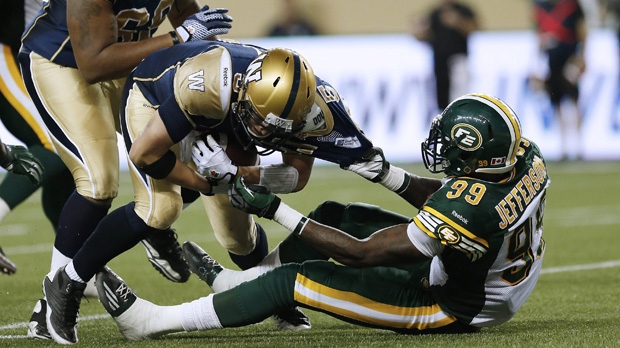 Winnipeg Blue Bombers' quarterback Drew Willy (5) gets hauled down by Edmonton Eskimos' Willie Jefferson (99) during the second half of CFL action in Winnipeg Thursday, July 17, 2014. THE CANADIAN PRESS/John Woods

WINNIPEG -- Willie Jefferson thought there would be some backlash when he left the Saskatchewan Roughriders for the rival Winnipeg Blue Bombers.

Turns out he was right.

Some Saskatchewan fans had "outlandish" reactions on social media for the all-star defensive end, but one creative insult left the prized free-agent acquisition laughing.

"The funniest thing that I remember was a picture of me, my wife and our daughter in our Saskatchewan jerseys," Jefferson said Friday after Day 6 of training camp.

"The guy reposted the picture but he put the poop emoji on our faces. Yeah, man, that was funny."

All of Jefferson's green-and-white memorabilia from the past three seasons is now packed up in storage and he has quickly adapted to wearing Winnipeg's blue and gold.

Signing a one-year contract with the Bombers in February after being pursued by Montreal, Saskatchewan, Hamilton and B.C., was the right move, he said.

"Being here now and seeing how practice goes, seeing how the coaches are with the players and how interactive they are outside of the locker-room, it's nice here," said Jefferson, 28, a CFL all-star the past two seasons.

The six-foot-six, 245-pound Texas native played his first two seasons in the league with Edmonton. Last season, he had a career-high 10 quarterback sacks, 24 defensive tackles and took two interceptions back for touchdowns, including a 97-yarder off Bombers QB Matt Nichols.

Jefferson's skillset of speed and shifty moves is expected to give the club a dominant duo with Jackson Jeffcoat on the other end.

"He's just such a great player," Jeffcoat said of his new teammate. "He's very rangy so he can do a lot of things on the field. He's got a plethora of moves so tackles can't really get a bead on him.

Jefferson is a familiar name to Jeffcoat. His father, former NFL defensive end Jim Jeffcoat, had watched Jefferson excel in another sport.

"My dad actually got to watch him play basketball and said he was a really good high school basketball player as well," Jackson Jeffcoat said.

His father was glad to hear Jefferson had joined the Bombers.

"He said, 'It's going to be good. You guys will complement each other well,"' said the six-foot-three, 251-pound Jeffcoat.

That theme carried over to Winnipeg defensive line and linebackers coach Glen Young, who chuckled when he discussed the potential of his bookends.

"(Jefferson's) presence is going to make a difference for us," Young said. "To have him and Jackson coming off the edge is going to be such a tremendous asset for us.

"I can't even tell you how much fun it's been for me to watch it as it's been developing through training camp. They're so different, but they're so effective."

He described Jefferson as long with finesse and Jeffcoat as powerful with great hands.

"They bring so many differences, but collectively together it's like everything you want as a D-line coach," Young said.

So could Jefferson and Jeffcoat be the league's premier pair of rush ends?

"I think the sky's the limit for them," Young said.