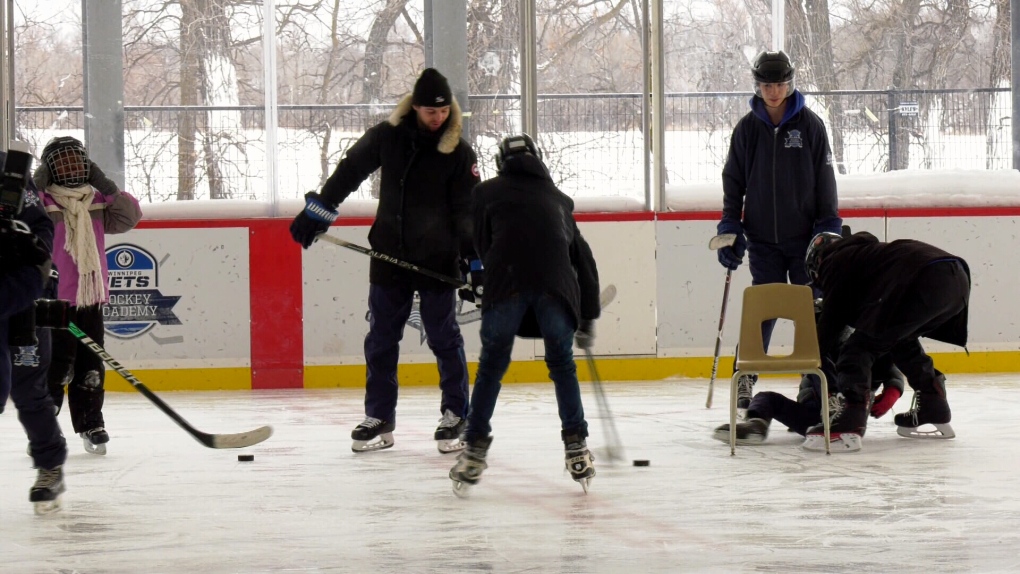 Dozens of newcomers slipped on skates for the first time and received a warm introduction to the winter past-time from Winnipeg Jets star Josh Morrissey.

WINNIPEG -- Dozens of newcomers slipped on skates for the first time and received a warm introduction to the winter past-time from Winnipeg Jets star Josh Morrissey.

“Having the opportunity to get involved in sports and make new friends and be a part of a team, you can learn some much from that,” said the 24-year-old defenceman.

Morrissey tried his hand at coaching Saturday afternoon, helping around 30 families from across the Middle East, Africa and Latin America glide onto the rink at Camp Manitou outside Winnipeg. The skating lesson was hosted by the Jets’ True North Youth Foundation.

The camp, run by the True North Youth Foundation, is hosting six “Welcome to Winnipeg” events for immigrants and refugees over the winter.

“What blows me away is that a lot of them have come from climates where it’s 32 C today. Today it’s -30 out here,” laughed Bochinski.

Ten-year-old Salma Roudani recently moved from Venezuela and embraced the frigid temperatures. “You can really feel the cold and the rush of wind coming to our face. You get to learn new tricks and it’s fun.”

Despite a few stumbles, most of the newcomers took the skating lesson in strides.

“They are learning very fast,” said Mohamed Mohamed from the Immigrant Refugee Community Organization of Manitoba, which helps newcomers get settled in the city. “Fifty per cent of them have been in Canada for less than eight months.”

Adhel Kuac, who arrived in Manitoba from Egypt, also tried shooting the puck around. “You see hockey players on TV and you think to yourself ‘how does it feel?’”

Morrissey says he hopes the introduction to skating will inspire a new generation of hockey players. “It would be really cool to see one of these kids to go on and play in the NHL one day.”