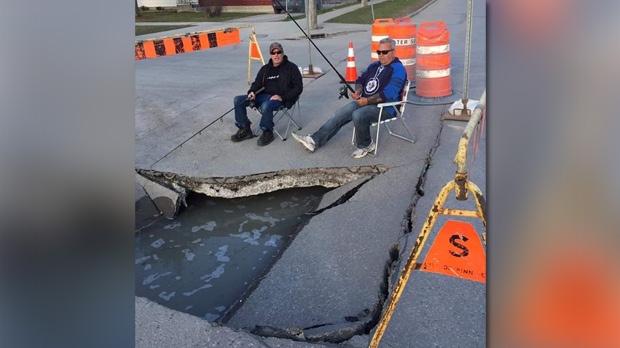 A couple of Winnipeg men who set out Thursday evening with rods in hand may not have caught any fish in a sinkhole in St. James, but they did catch a lot of likes on Facebook.

Shawn Pageot told CTV News it was his friend Joe Macdougall’s idea to stage the photos, which were snapped by another friend, George Hewitt.

“He said, ‘Hey, a big fishing hole just opened on Ness, you got any fishing rods?’” said Pageot, who decided to play along and said the photos were taken around 7:30 p.m. Thursday.

“We got a lot of laughs, people going by, actually a guy pulled up behind us, I think he was videotaping,” he said.

Pageot said the photos have been shared to a couple of different community Facebook groups, and commenters are showing their appreciation.

“People saying thanks for the good laugh on a Friday morning,” he said.

The City of Winnipeg said crews have barricaded the area of Ness Avenue and Parkdale Street due to a “void in the road,” and said a water main break in the area which isn’t affecting customers is expected to be repaired by Saturday. It’s not yet known how long it will take to fix the road.

It also provided a safety reminder, asking residents to protect themselves by staying away from the area and not going behind the barricades.