WINNIPEG -- In a split-second decision, a Winnipeg police officer said he made eye contact with a teen driving a stolen Jeep and fired his gun two times – striking and fatally wounding Eishia Hudson. Manitoba’s police watchdog has determined the officer will not face any charges.

The details of the deadly shooting have been revealed in a final report released Thursday by the Independent Investigation Unit (IIU).

An alleged theft from a Liquor Mart in Sage Creek quickly escalated on the evening of April 8, 2020, when multiple suspects, who police said were driving a stolen vehicle, attempted to escape from pursuing officers – leading them on a destructive chase that ended at Lagimodiere Boulevard and Fermor Avenue when an officer fired his gun two times at the driver.

The driver – who was later identified as Hudson – was taken to hospital where she died of her injuries.

CTV News previously reported Hudson had no prior involvement with police, according to her mother.

"I want her name to be known out there," Hudson's father William said during a news conference with the Assembly of Manitoba Chiefs hours after the report was released.

William said he remembers his daughter's smile - one that could light up the room. Hudson was 16 years old when she was shot and killed.

"When a cop pulls out his gun, think twice about what you are doing. This has to stop. In Canada, in Manitoba, in law enforcement."

THE DETAILS OF POLICE WATCHDOG INVESTIGATION

The decision comes after a nearly 10-month-long investigation into the police shooting. Investigators with the IIU interviewed 14 witnesses, six police officers who were involved in the shooting, along with three of the four people who were in the vehicle with Hudson when she was shot.

"This investigation was a complete and thorough review of all available evidence. I'm satisfied that no stone was left unturned," Zane Tessler, the civilian director of the IIU said, adding he understands many may be upset with the decision, but said the facts drive the investigation.

The accounts from the evening of the deadly shooting vary, but nearly all of the witnesses said they saw a Jeep Cherokee jump the curb, swerve back over the median and smash into a truck. 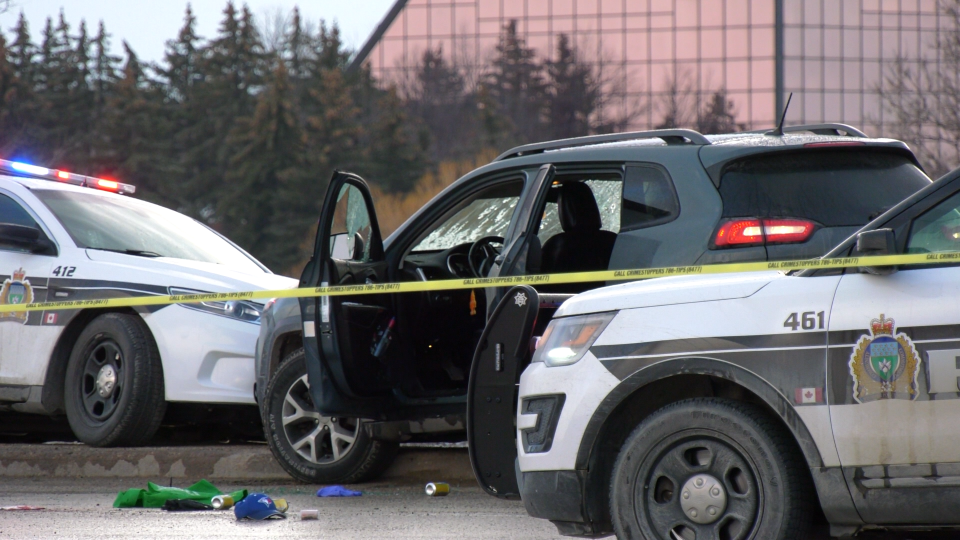 "What these discrepancies tell me is that people are trying to be as honest as they can and are not manufacturing their evidence in any way," Tessler said.

'THEY GOT US NOW': WITNESS SITTING IN JEEP WITH HUDSON RECOUNTS SHOOTING

Hudson, who is identified in the IIU report only as the 'Affected Person,' was in the Jeep with four other people.

One of those people in the Jeep told investigators the 16-year-old girl had been goaded by the other passengers to drive faster and get away from police.

After crashing into the truck, the person in the vehicle said Hudson reversed for a short time, "but she stopped it once she seen (sic) all these cops around us 'cause she didn't want to hit, I guess, hit any of them."

They said officers on foot were around the car yelling something, but they couldn't make out what they were saying because the windows were rolled up and music was playing.

They told IIU investigators they heard a gunshot, and Hudson said, "They got us now." About four seconds later, they heard a second gunshot.

The IIU said the officer who shot Hudson would not agree to an interview with investigators, but did provide his notes and a written statement. Tessler said officers cannot be forced to take part in IIU investigations.

The officer had finished his training for the duty gun he was carrying less than a year earlier, according to the IIU.

In the statement, the officer said he and his partner laid a spike strip on the road, but saw the Jeep swerve out of control, hit the truck, and stop in the northbound lane on Lagimodiere. 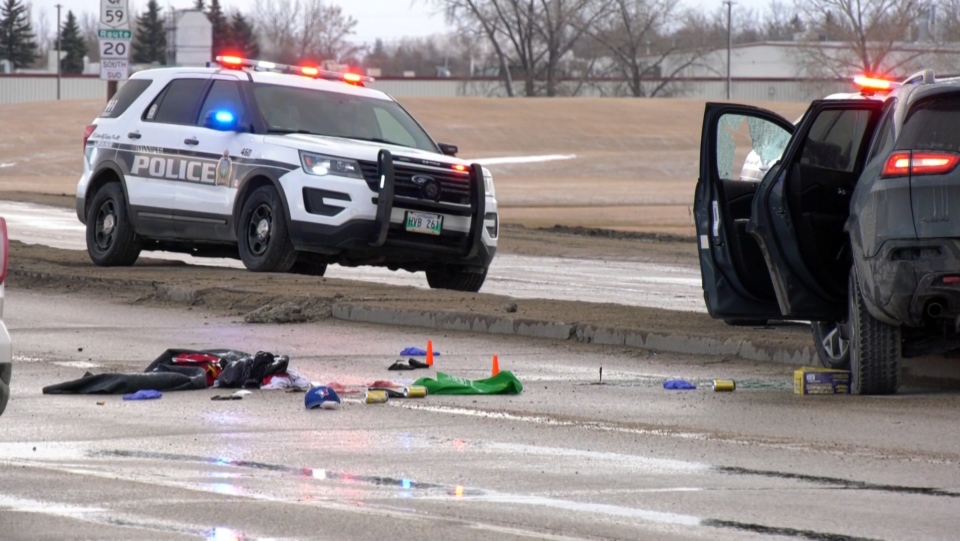 He said he ran to the vehicle and took out his gun, saying he yelled multiple loud commands to "stop, show hands and get out of the vehicle."

"The suspect stared at me and could clearly see I was standing there in full police uniform yelling while holding a firearm," the statement from the officer reads.

Though the windows were tinted, the officer said he saw the driver appeared to be an Indigenous person in their late teens or early twenties.

He said the driver cranked the wheel and reversed, which he said caused the front of the Jeep to spin towards him and his partner – a statement Tessler confirmed does not match up with video evidence from the scene.

Tessler said IIU investigators noted this, but said it is not unusual for people's recollection of events to be different from what others have seen.

"Fearing grievous bodily harm or death, I jumped back and fired one round at the suspect with my service pistol," the officer said in a statement, adding that the vehicle continued to reverse.

Not all of the officers at the scene resorted to using their guns. According to a witness statement, officers had smashed the windows of the vehicle and were attempting to use Tasers before hearing the gunshots.

A CRUCIAL PIECE OF EVIDENCE IN THE INVESTIGATION

Along with the witness statements, the IIU had another piece of evidence that Tessler said was crucial to the investigation.

One of the witnesses recorded a video of the shooting, which was later shared to social media. The IIU said the video shows the Jeep hitting the truck, as three officers run towards it.

The report said the first gunshot can be heard in the video, and four seconds later – a second gunshot.

Hudson was pulled from the vehicle – some accounts from witness officers say she was thrown to the ground – and was placed in handcuffs. The officer then performed first aid on Hudson until paramedics arrived on the scene.

According to the IIU, Hudson was hit with one gunshot.

"As noted in the report, officers are required to react in parts of seconds to situations that are volatile and fluid and can change on the moment when risk to themselves or others in the public arise," Tessler said.

"In this particular case, the actions that appear to be taken by the driver of that Jeep was found to both be objectively and subjectively supportive of the belief that lives were in danger if immediate actions were not taken."

During the investigation, the IIU requested the opinion of an Alberta expert in use of force analysis, who said their opinion was the officer followed proper police practices under the circumstances.

The IIU also requested the Manitoba Prosecution Service (MPS) review the full investigation and to give a Crown opinion on the shooting. In a 45-page decision, the MPS said it was of the view that there is no basis to lay charges against the officer.

'I WILL NOT STOP FIGHTING FOR MY DAUGHTER': HUDSON'S FAMILY CALLS FOR INQUIRY

The Manitoba Advocate for Children and Youth is investigating Hudson’s death. Tessler said he expects the Office of the Chief Medical Examiner will also call an inquest into the death. 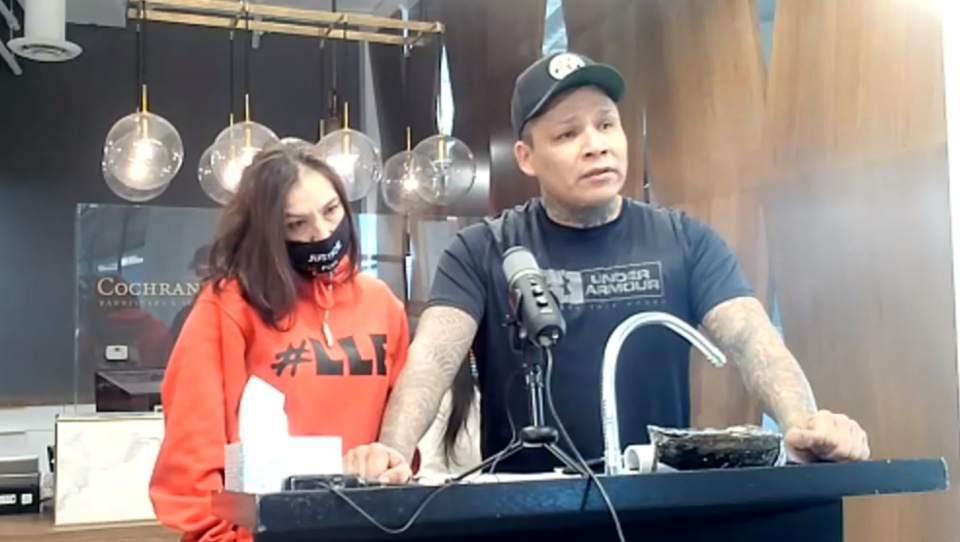 In a statement, Winnipeg Police Service Chief Danny Smyth said the police will fully cooperate and participate in the inquest.

The IIU said the investigation into the police shooting is now closed, but Hudson's family said they want a review of the investigation – one William called "whitewashed" and "racist towards Indigenous people."

"With the decision given by the Investigation Unit, I feel complete anger. I feel the report was unclear and one-sided. I feel frustrated and disappointed with the outcome," he said through tears.

"Systemic racism is alive. It is all over. It is bad that the Winnipeg police are protected for what they do."

William was joined by Hudson's mother Christie Zebrasky, who called for an impartial assessment of the investigation to be completed, along with a public inquiry into the police-related deaths of Indigenous people.

"We are going to fight and continue to fight. I will not stop fighting for my daughter," he said.

Their calls were echoed by many Indigenous leaders in the province, including Arlen Dumas, the Grand Chief of the Assembly of Manitoba Chiefs, Winnipeg MP Leah Gazan, and Manitoba NDP Justice Critic Nahanni Fontaine.

"Change is needed so this never happens again because we would never wish this on another family," Zebrasky said.

Hudson's family and the Assembly of Manitoba Chiefs responded to the IIU's report in a Facebook Live video, which can be watched below.