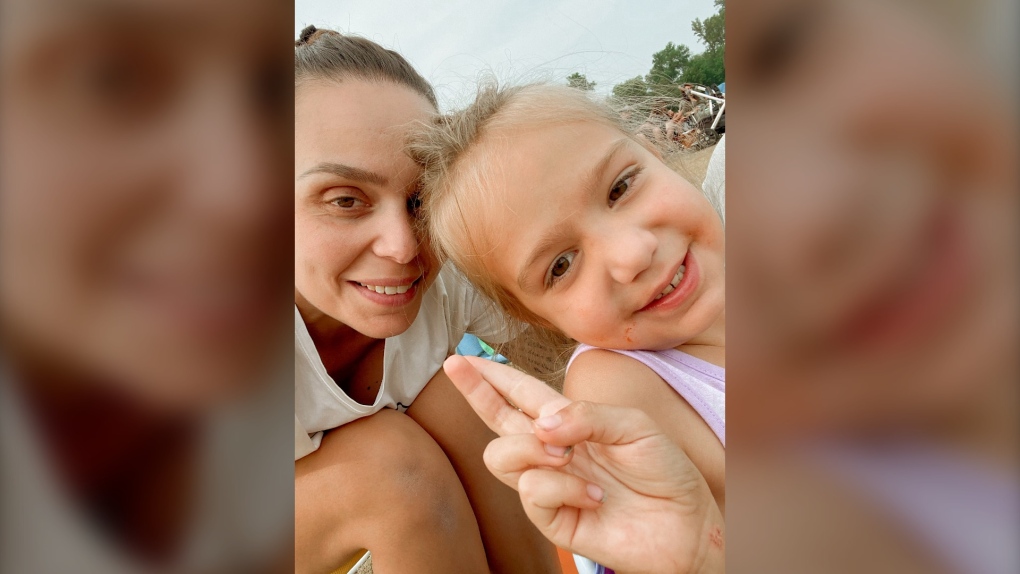 Sarah Coey with one of her children in this undated photo. (Source: Sarah Coey)
WINNIPEG -

A Winnipeg woman is voicing her frustration after she says she was let go by text message from her new job at a hospital while isolating with her children who had COVID-19.

Sarah Coey said she was offered a new position at the Health Sciences Centre (HSC) as a CT Clerk on Dec. 23. However, after her first day on the job on Jan. 4, one of her kids tested positive for COVID-19 and therefore had to isolate for 10 days as they're under the age of five and can't be vaccinated.

As her kids' primary caregiver, Coey said she had to stay home as well. She said she told her manager about the situation after learning about her child's positive test.

"At that point, she was okay with it and she let me be home with my child and take care of him," said Coey.

As the isolation period was ending, Coey said her second child also tested positive for COVID-19. Because they have one dose of the vaccine, they were also required to isolate for 10 days.

"Again I'm her primary caretaker, so I had to be home for 10 days," she said.

Coey said she again informed her manager over text about the situation, but the response was not the same as the first time. 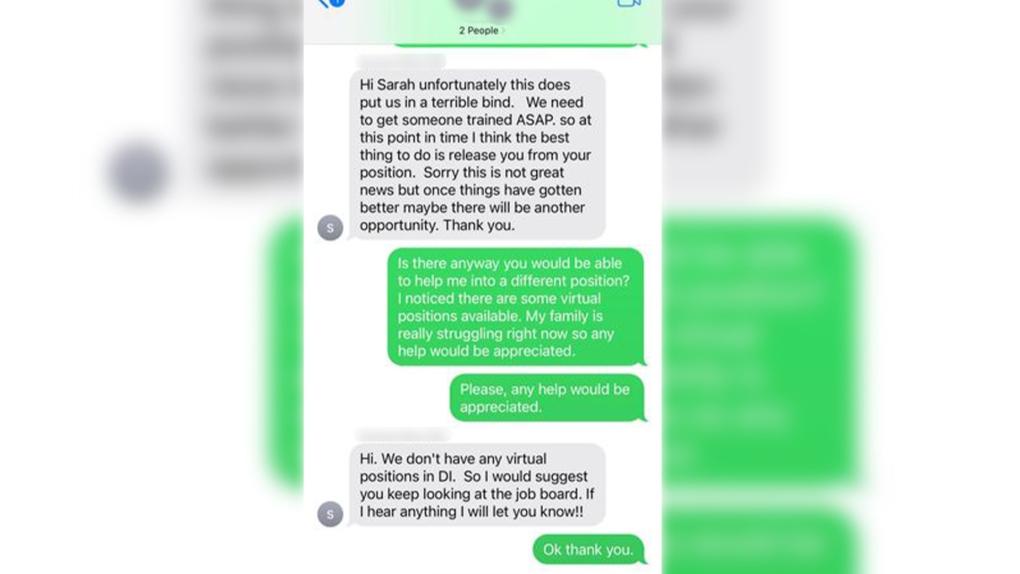 A text message to Sarah Coey from her manager at HSC that says she is being let go after she had to isolate twice with two of her kids who tested positive for COVID-19. (Source: Sarah Coey)

"Hi Sarah. Unfortunately this does put us in a terrible bind. We need to get someone trained ASAP. So at this point in time I think the best thing to do is release you from your position," her manager said in a text message on Jan. 14. "Sorry this is not great news but once things have gotten better maybe there will be another opportunity. Thank you."

Coey said she was shocked to receive the text message noting that when she was first hired, everyone was excited to have her join the team.

"You'd think HSC and Shared Health, they know all about COVID protocols and what it is doing to families and health-care workers. I didn't find any compassion."

After being let go, Coey said she talked with human resources about the firing, but added it got her nowhere.

"They basically, no matter what I said, they basically told me the manager has the say," she said.

Coey said she has not heard anything else from HSC or Shared Health, but continues to look for a new job within the health-care system.

"My whole intention was to help out because there is so much stress put on the health-care system right now."

Debbie Boissonneault, the president of CUPE Local 204 – the union that represents health-care support workers, said she was appalled when she heard that Coey had been let go over text while in isolation.

"I understand that they want someone to be trained on the unit. They did hire her, this is beyond her control," said Boissonneault.

She added if Coey gets in contact with the union, they can talk to the employer on her behalf.

"To say, 'You're penalizing her because she is a parent. You hired her because she had qualifications to do the job. She wants to work within the facility and she was hoping, you know, that she could see some lenience here on you holding her position.'"

Boissonneault said she has never heard of anyone being let go via text, calling the situation "out of the ordinary."

CTV News has reached out to Shared Health about Coey being let go over text while isolating with her kids and a spokesperson said they would not comment on an HR matter.

The Conservative Party is doubling down on its call for the federal government to do away with travel restrictions and revert back to 'pre-pandemic rules' in light of recent airport delays.

The Winnipeg Police Service has changed a 35-year-old man with first-degree murder in connection with the death of a woman whose remains were found near an apartment building in North Kildonan, and police are investigating the possibility of more victims.

Health Canada says there is currently a shortage in this country of infant formula designed for babies with food allergies and certain medical conditions amid a serious shortage in the United States.

The former clerk of the British Columbia legislature has been found guilty of fraud and breach of trust in connection to allegations of improper spending made against him.

There's a lesson for Canada's political leaders in the short life and quick death of Jason Kenney as premier of Alberta, writes Don Martin in an exclusive opinion column for CTVNews.ca.

Prince Charles and Camilla, Duchess of Cornwall, have started their journey to Canada's North, where they are scheduled to speak with First Nations chiefs as the final day of the royal visit focuses on Indigenous issues and climate change.