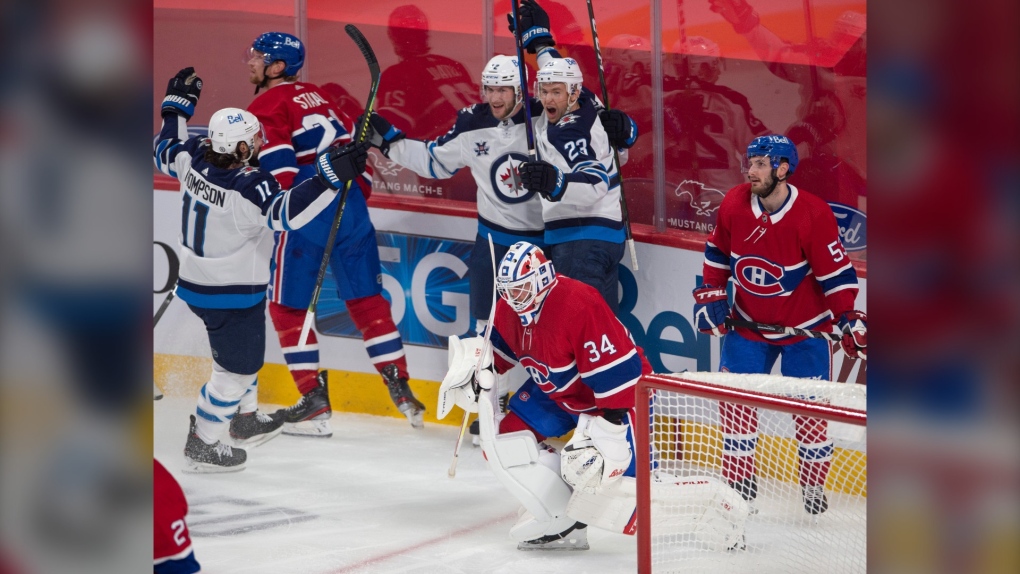 MONTREAL -- With captain Blake Wheeler out of the Winnipeg lineup indefinitely due to a head injury, the Jets wanted to step up in his absence and set the early tone for the opener of a five-game road trip.

Several players did just that Thursday night in a 4-2 victory over the Montreal Canadiens at the Bell Centre.

Connor Hellebuyck was solid in net and four different players scored for the Jets, who have just two regulation losses in their last nine games.

"It's always tough playing without your top players and obviously Wheels is a huge part of this team and we miss him," said Jets forward Trevor Lewis. "But I thought we came out (strong) early and played well."

Wheeler was elbowed in the head in Winnipeg's 4-3 win over Ottawa on Monday. He won't join the Jets on the road trip.

Lewis, Josh Morrissey, Nikolaj Ehlers and Andrew Copp, with an empty-net goal, scored for Winnipeg (24-13-3). Phillip Danault and Paul Byron replied for the Canadiens (17-11-9), who have dropped two straight.

With the victory, the Jets moved six points behind the first-place Toronto Maple Leafs in the North Division standings. Montreal outshot Winnipeg 38-27.

The Jets scored just 18 seconds into the game. Morrissey jumped in on a 3-on-2 rush, took a pass from Mathieu Perreault and sniped it in off the post past a screened Jake Allen.

The Canadiens were quick to answer with Danault knocking in a rebound at 1:40. He converted after Hellebuyck stopped Tomas Tatar down low.

Winnipeg regained the lead at 8:03 after Neal Pionk floated a pass into the goalmouth that the well-covered Lewis was able to redirect with one hand.

"Tonight I thought we were moving in the first period," said Canadiens head coach Dominique Ducharme. "But we had three decisions -- or three plays -- that we didn't react well."

The teams played a little tighter in the second period.

Montreal had a great chance to halve the deficit while shorthanded midway through the stanza. Danault stole the puck from Pionk behind the net and fed Artturi Lehkonen but his shot hit the crossbar.

Byron made it a one-goal game moments later after the puck took a strange hop off the boards, leaving Hellebuyck out of position. Byron one-timed it underneath the sprawling netminder at 15:14.

"I get a little bit angry because I have no control over that kind of a bounce," Hellebuyck said. "But I just move on."

Montreal's Jonathan Drouin had a great chance in the third period to end his six-week scoring drought. He moved into the slot after a toe drag but couldn't beat Hellebuyck.

The Canadiens were able to kill off the penalty and pulled Allen with about 90 seconds to go but Copp sealed the win with an empty-net goal at 19:22.

The Jets improved to 15-1-2 when leading after 40 minutes. The teams will face off again Saturday at the Bell Centre.