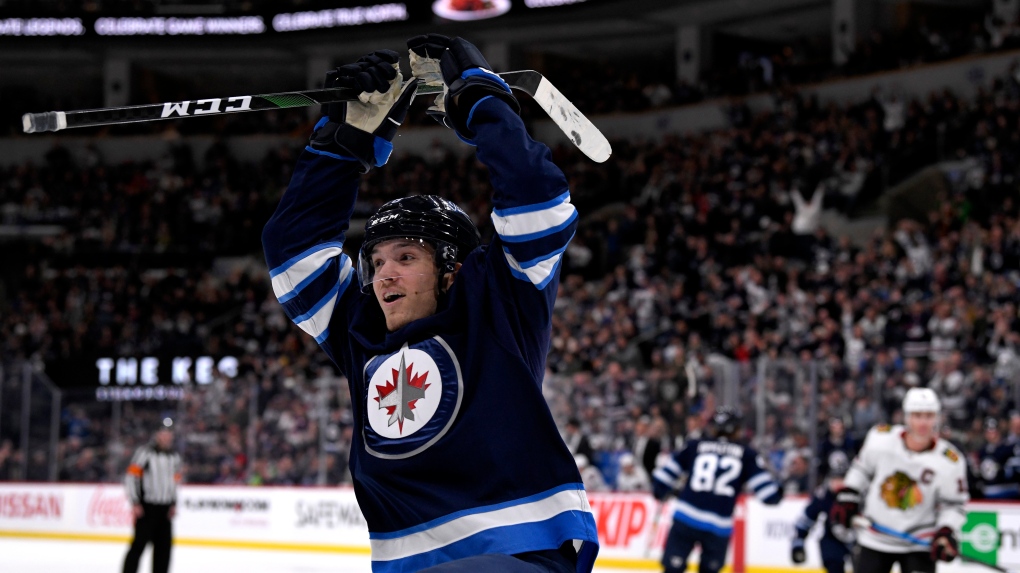 WINNIPEG -- Defenceman Nathan Beaulieu's first goal of the season at 1:36 of the third period held up as the game winner as the Winnipeg Jets beat the Chicago Blackhawks 3-2 on Sunday.

Playing in his 27th game of an injury-riddled season, Beaulieu's one-timer from the point hit a Chicago player and went past Blackhawks goalie Corey Crawford. Beaulieu also had an assist.

Mason Appleton had a goal and assist and Jack Roslovic also scored for Winnipeg, which was coming off two straight losses. Dmitry Kulikov picked up a pair of assists.

Patrick Kane had a goal and assist and Ryan Carpenter also scored for Chicago, which was coming off an 8-4 win in Calgary on Saturday.

The Blackhawks led 1-0 after the first period.

Carpenter scored his third goal of the season after Kane sent a sharp-angled backhand pass to the front of the net and Carpenter redirected the puck past Hellebuyck at 15:44.

Jets forward Andrew Copp went in alone on Crawford about a minute later, but his shot missed the net.

Winnipeg outshot the visitors 14-10 in the opening period.

Appleton tied it up when he tipped in Beaulieu's point shot at 6:38 of the second.

Winnipeg appeared to go ahead at 9:05 on a goal by Kyle Connor, but it was reviewed and waved off because the puck went in off his arm.

Roslovic gave the Jets the 2-1 lead at 15:37 when he tipped a Dmitry Kulikov point shot, but Chicago tied it up after Kane scored his 27th goal of the season with 53 seconds left in the middle period.

Beaulieu, who was out of the lineup with three different injuries, took a pass from Patrick Laine and fired the puck at Crawford. The blue-liner made a gesture of throwing a monkey off his back after his goal.

The Blackhawks tried to beat Hellebuyck in the final minutes with the extra man, but Jets blocked shots and got their stick on pucks to stymie their efforts.

Not one penalty was called in the game.

Winnipeg hosts Los Angeles on Tuesday. Chicago is home to the New York Rangers on Wednesday.

This report by The Canadian Press was first published Feb. 16, 2020.