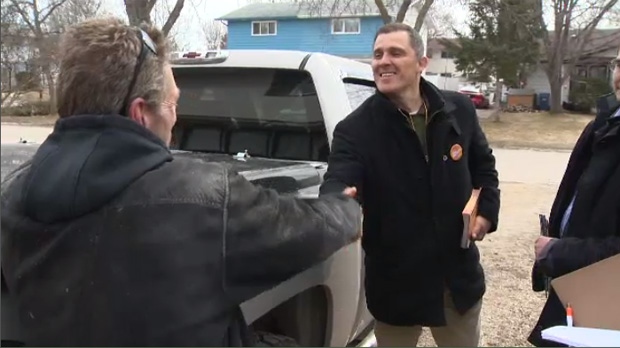 Less than three weeks until the provincial election, candidates are making themselves known.

In Assiniboia, the Liberals, NDP and Conservatives were out canvassing Friday.

The constituency used to be a conservative stronghold until NDP Jim Rondeau took the reins in 1999, but the well-known politician isn't running this year.

Rondeau is hoping to pass the banner on to another NDP member, Joe McKellep, a longtime civil servant and former RCMP auxiliary constable.

“I really want to preserve the uniqueness of Assiniboia, and my job is to represent the community to the best of my ability, and to bring that voice forward to the government and the legislature,” said McKellep.

Meanwhile, the conservatives are aiming to take the seat back. The party has a well-known Manitoban in their corner.

Steven Fletcher held the federal seat for Charleswood-St. James-Assiniboia for more than a decade. He said it's that experience that will best serve voters.

“I understand the machinery of government, how to get it done, not to be bamboozled by whoever's trying to do the bamboozling,” said Fletcher.

For more than 15 years, the constituency has voted in the NDP, but now campaign signs in more than one colour pepper the streets.

“I think it's going to be a very close race, because the former fellow, Rondeau is very popular, and I think he did a good job. Now these are three unknown candidates,” said voter, Ron Lovequist.