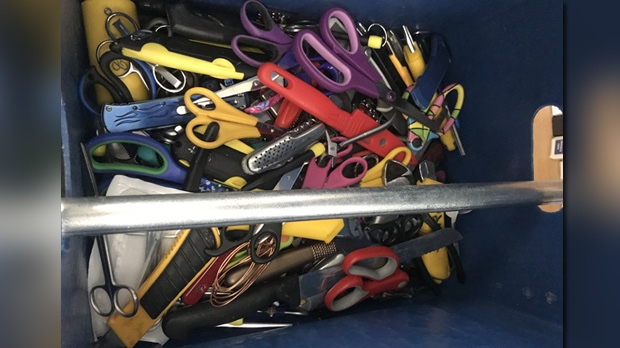 These items have been seized at the Millennium Library's security checkpoint.

New numbers are shedding light on the new security policy at the Millennium Library.

CTV News has obtained a list of the items seized during the first week of the new screening process.

It’s a policy which has sparked controversy with some opposing the extra security.

Between Feb. 25 and Mar. 4 guards confiscated nearly 60 items from people passing through the new security checkpoint, but the city says no items deemed illegal have been found.

“Since implementing the screening process, the library has not had to contact the Winnipeg Police Service with regard to any illegal items,” said a city spokesperson.

Numbers obtained through a Freedom of Information request show 22 pairs of scissors, 10 pocket knives and six box cutters were seized.

Library visitor Eric Gonzales said he feels more comfortable knowing people are being stopped from bringing those items inside.

"For a public place it's going to be either downgraded or people will stop coming if they don't see or feel safe in the area," he said. “Plain and simple.”

"If it gets confiscated it's not going to happen, right,” said Anderson.

The union representing library workers said staff members are supportive of additional security measures but have lingering concerns about the implementation of the policy.

"I've been told that the staff do feel safer,” said Canadian Union of Public Employees Local 500 president Gord Delbridge. "Right now I think there needs to be additional consultation that takes place."

A grassroots group called Millennium for All opposes the measures.

Library regular Will Petrik said the list of items seized doesn't concern him, especially when it comes to pocket knives.

"I always carry one, like what's the deal,” said Petrik. “I'm from the generation, a man my age is always going to have a Swiss Army knife. That's standard."

Petrik said he stopped going to the library the day the new security policy took effect.

He sees it as exclusionary and an invasion of privacy.

“For people who are vulnerable or with mental health issues,” said Petrik. “People with mental issues, it can be very intimidating to have to go through security.”

"I’m just really disappointed in Winnipeg. This library used to be the benchmark library. I thought we were trying to create a more inclusive society and we’re trying to get people to live downtown.”

Winnipeg police said the items seized can pose a risk but Const. Rob Carver said the items being seized by police in the area around the library are even more concerning.

"I certainly understand a city facility taking enhanced measures because adjacent to that particular area we're seizing weapons every day,” said Carver. “I understand there’s a lot of concern about what sort of message it sends when you have to go through a security check. I can just tell you from my own experience, as a police officer, what I see being seized was startling to me.”

The city said the library is looking at the feasibility of lockers to give people a place to store their belongings before going into the library.

The Millennium Library has recently enhanced the screening process to include the provision of bags for storage.

The library is exploring a process for recycling the items confiscated prior to the introduction of the storage option.

The city’s protection, community services and parks committee has also ordered a review of the need for the security measures following a motion tabled by councillor Sherri Rollins.

It will examine alternatives and best practices of public facilities in Winnipeg and other Canadian cities.

A report is expected back within four months.