New vaccination appointments in Manitoba paused due to Pfizer delays 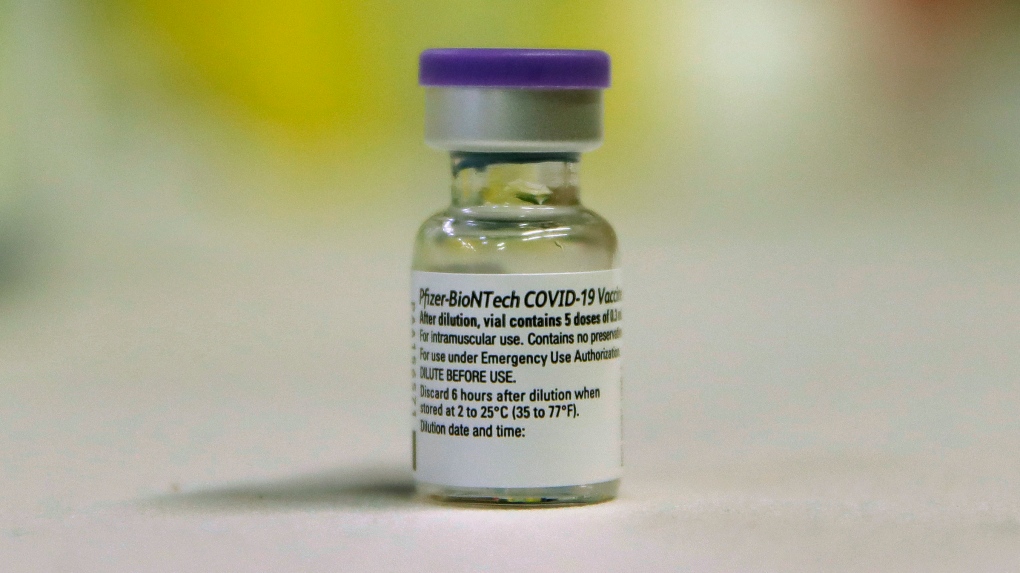 A vial of Pfizer-BioNTech COVID-19 vaccine is pictured at a coronavirus vaccine center in Poissy, France, Friday, Jan.8, 2021. As France examines why its vaccination campaign has started so slowly, the answer lies partly in thick forests of red tape and the government's decision to start with the toughest group to reach: the elderly in nursing homes. (AP Photo/Christophe Ena)

WINNIPEG -- The head of Manitoba’s COVID-19 vaccination task force says the province is currently not making any new appointments for vaccinations due to supply chain issues with bringing the vaccine to Canada.

In a message on Twitter posted Friday afternoon, Dr. Joss Reimer, who chairs the task force, said the current supply of COVID-19 vaccine will be used to complete first and second dose appointments that have already been scheduled.

“Once we hear more from our vaccination partners, we will update Manitobans,” Reimer wrote. “Our immunization plan is to safely and responsibly vaccinate as many Manitobans as possible with the doses we’ve been given.”

Pfizer confirmed on Friday that there will be delays in distributing the vaccine due to expansion plans at its European manufacturing facility.

With this, it will result in up to 50 per cent of the scheduled doses to be delayed.

The provincial government said it anticipated issues could develop and the Vaccine Implementation Task Force is ready to "implement contingency plans if necessary."

Maj-Gen. Dany Fortin, who is leading Canada's logistical rollout for the vaccine, said the impact will be felt the most during the week of Jan. 25.

Federal Procurement Minister Anita Anand said even though there is a delay, the doses will be made up.

Premier Brian Pallister said this delay now backs up the strategy the vaccine team had but in place.

"Our vaccination team has focused a little less on trying to get good short term stats by rushing everything out and a little more on better long-term protections by holding something back," said Pallister.

He also noted the province hasn't delayed administering the second dose, which is recommended to be given three weeks after the first shot, which he says means more Manitobans are receiving more effective doses.

"One of the motivations for us holding some back is that we have been concerned about potential disruptions in the supply chain and now that's happened. I think this gives support to the Manitoba vaccination team's strategy."

Since the vaccine has become available, Manitoba has received 31,590 doses of the Pfizer product and 7,300 doses from Moderna.

The province also expects to receive 9,360 from Pfizer next week and 7,400 from Moderna.

The province also announced that so far, 13,539 doses of the vaccine have been administered, 2,138 of those are second doses.

The criteria for those who are eligible to get the vaccine has changed slightly. It now includes health-care workers at long-term care facilities who were born on or before Dec. 31, 1983. This has changed from the previous date of Dec. 31, 1977.

Manitobans who have already booked an appointment are being reminded that the vaccine site in Brandon at the Keystone Centre is opening next week and if they would like to change their appointment to be in Brandon instead, they can do so by calling the original booking number they received.

- With files from CTV's Rachel Aiello and Charles Lefebvre.