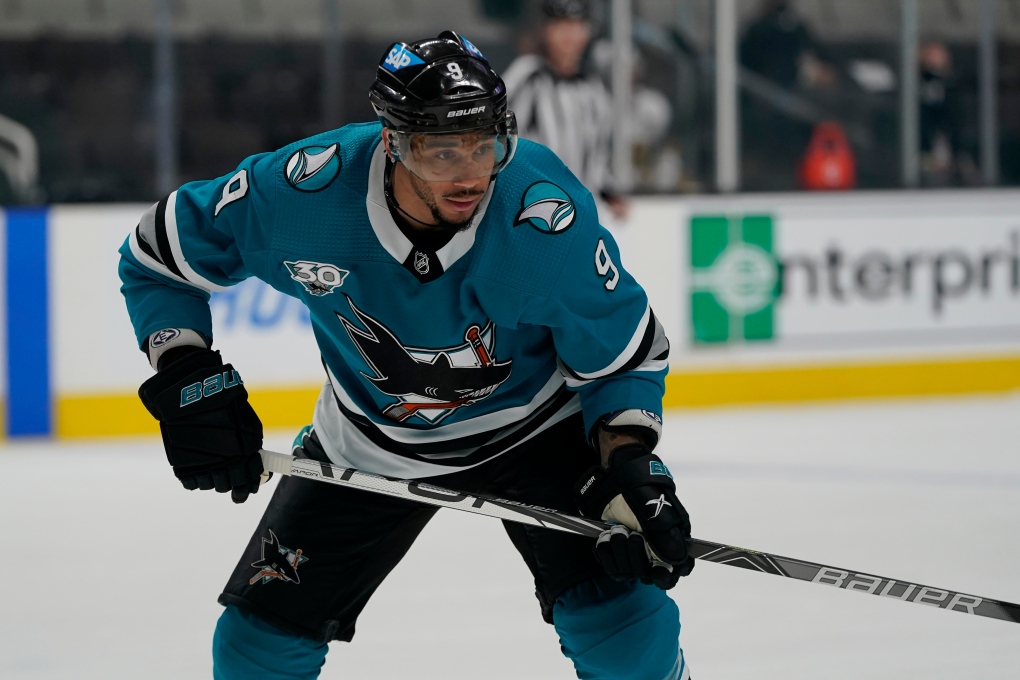 In this May 12, 2021, file photo, San Jose Sharks' Evander Kane (9) looks on during an NHL hockey game against the Vegas Golden Knights in San Jose, Calif. The Sharks placed Kane on unconditional waivers on Saturday, Jan. 8, 2022, with the intent to terminate the remainder of his $49 million, seven-year contract. (AP Photo/Jeff Chiu, File)
SAN JOSE, Calif. -

The NHL Players' Association has filed a grievance against the San Jose Sharks for terminating the remainder of Evander Kane's contract, a person with direct knowledge of the decision told The Associated Press on Monday.

The grievance, contending the Sharks did not have sufficient grounds to make the move, was filed Sunday night, the person said, speaking on condition of anonymity because the matter is now in the league's hands.

The Sharks placed Kane on unconditional waivers on Saturday, saying the forward violated COVID-19 protocols while with the AHL Barracuda. Kane went unclaimed over the 24-hour period, putting the Sharks in position to terminate the remainder of the player's contract.

Kane is now a free agent and open to sign with any team, while awaiting the start of the grievance process.

The decision to terminate Kane's contract ended a months-long saga in San Jose. Kane faced accusations of gambling on games, purposely losing games he bet on, as well as sexual and physical abuse from estranged wife, Anna, over the summer.

The NHL investigated and found no evidence to support those allegations, but did suspend Kane for 21 games for submitting a fake COVID-19 vaccination card. When the suspension was lifted at the end of November, the Sharks placed Kane on waivers and sent him to the AHL when he was unclaimed.

The 30-year-old Kane has 264 goals and 242 assists in 769 career games, also playing for Atlanta/Winnipeg and Buffalo.

The inquiry into the 2020 mass shooting in Nova Scotia is hearing Thursday from a retired senior Mountie who has been granted special accommodations to ensure he is not re-traumatized by having to relive the tragic, 13-hour event.