WARNING: The details in this article may be disturbing to some viewers. Discretion is advised.

However, Smyth said investigators were presented with a plan by the forensics unit in June that left them with “no hope” of a successful recovery.

“The circumstances, combined with the safety hazard, formed the basis of a difficult decision not to go forward with the search at Prairie Green,” he said.

Last week, police announced four Indigenous women – Myran, Harris, Rebecca Contois, and an unidentified woman being referred to by the community as Buffalo Woman (Mashkode Bizhiki’ikwe) – were killed by an alleged serial killer.

The women are believed to have been killed between March and May of 2022.

Contois’ partial remains were discovered this summer in the Brady Landfill in Winnipeg.

Following a police board meeting last week, Smyth said police believed the bodies of the remaining victims were in a landfill, but said the search would be challenging.

Jeremy Anthony Michael Skibicki, 35, is facing four charges of first-degree murder. None of the charges against him have been proven in court.

Inspector Cam MacKid with the police service’s forensics, intelligence and technology division, said there are challenges in searching the Prairie Green Landfill compared to the Brady Landfill, saying officers did not have a starting point. 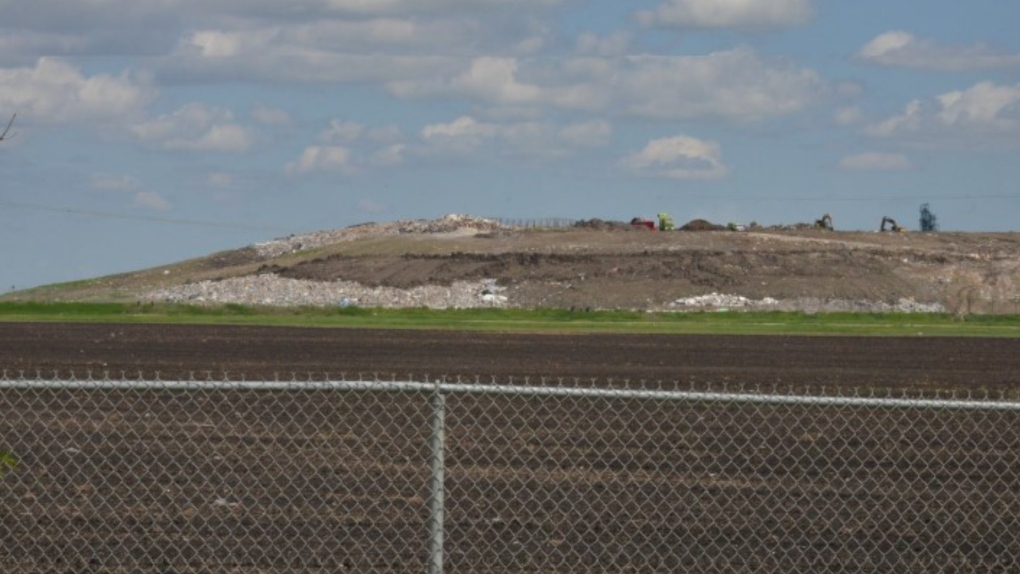 Winnipeg police believe the bodies of Marcedes Myran and Morgan Beatrice Harris were dumped at the Prairie Green Landfill near Stony Mountain, Man. Officers said the recovery of their bodies is likely impossible due to several factors. (Image source: Winnipeg Police Service)

He said police were able to close Brady Landfill within “three to five hours” once they learned of the possibility of remains being found, noting 100 truck loads of garbage were dropped during that time.

MacKid said there were 34 days between the time of the remains being dumped and when police became aware bodies were potentially in Prairie Green.

“During that time, for comparison, there were 10,000 truckloads that dumped in that same area,” MacKid said.

He added the garbage in the landfill was not compacted or buried in the Brady Landfill, unlike at Prairie Green, which was compacted by 9,000 tons of construction clay.

MacKid said at this point, police do not have a definitive location for the remains of Buffalo Woman.

‘IS HUMAN LIFE NOT FEASIBLE?: DAUGHTERS OF MORGAN HARRIS REACTS

During a press conference in Ottawa Tuesday, Morgan Harris’ daughter Cambria said she was “heartbroken” when she learned police wouldn’t be searching the landfill.

“They say they can’t search because it’s unfeasible. Is human life not feasible?” Cambria said during the conference. “Time and time again, our Indigenous women and brothers and sisters have to come here and we have to shout and we have to raise our voices begging for change and begging for justice for our people, and that is wrong.” 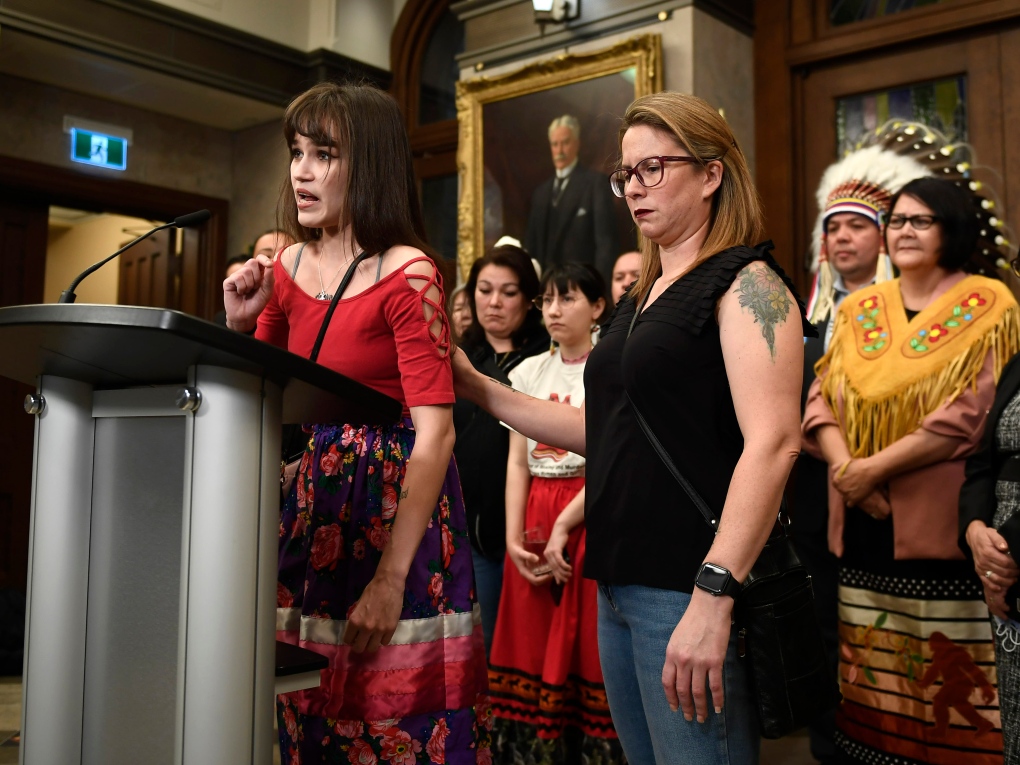 Cambria Harris, daughter of Morgan Harris, speaks during a news conference calling on the federal government to take action to end violence against Indigenous women, girls and two-spirit people, in the Foyer of the House of Commons on Parliament Hill in Ottawa, on Tuesday, Dec. 6, 2022. Police identified Morgan Harris as one of four women killed by an alleged serial killer in Winnipeg, but her body has not yet been found. THE CANADIAN PRESS/Justin Tang

She added, “My mother didn’t pass away with a home, so let’s pay her the respect that she deserves by finally giving her one that’s not a resting place at the Prairie Green Landfill, and for the other women as well.”

“These are people you are leaving in the landfill,” she said. “These are human beings. These women are deserving of a proper resting place, not to be left alone in a landfill in the dead of winter.”

Kera said there are people willing to help search for the women. 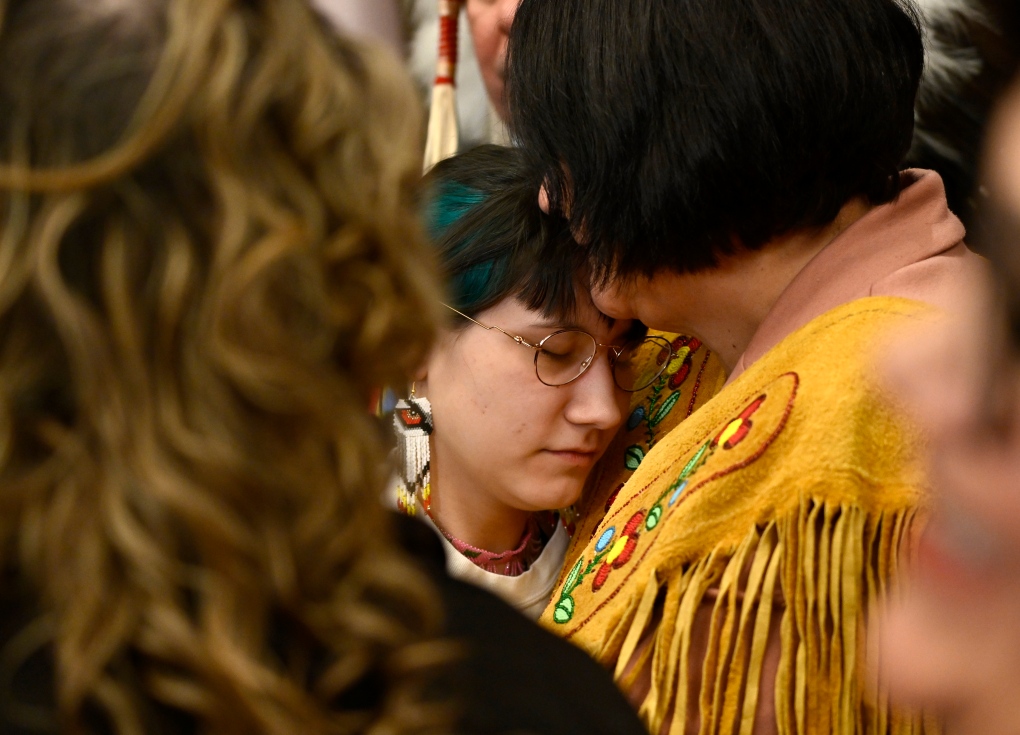 Kera Harris, daughter of Morgan Harris, is embraced by Cathy Merrick, Assembly of Manitoba Grand Chief, after a news conference calling on the federal government to take action to end violence against Indigenous women, girls and two-spirit people, in the Foyer of the House of Commons on Parliament Hill in Ottawa, on Tuesday, Dec. 6, 2022. Police identified Morgan Harris as one of four women killed by an alleged serial killer in Winnipeg, but her body has not yet been found. THE CANADIAN PRESS/Justin Tang

MP Leah Gazan (Winnipeg Centre) once again urged the federal government to provide resources for families to search for the remains of loved ones.

“We need money for searching. We need money for prevention, like the Red Dress Alert, money for shelters and emergency placements,” she said. “We need immediate resources to mitigate the violence that is being perpetrated against our women, girls and two-spirit.”

There is a support line available for those impacted by missing and murdered Indigenous women, girls and LGBTQ2S+ people: 1-844-413-6649.

Additional mental-health and community-based emotional support and cultural services are also available through the federal government.

-With files from CTV’s Taylor Brock and Danton Unger

After a radioactive capsule went missing in Australia, could the same happen in Canada?

After a tiny radioactive capsule went missing in the Australian outback, an expert in Canada says the likelihood of the same happening in this country is unlikely, given our strong regulations governing the handling of radioactive materials.

As Black History Month gets underway, Canada Post has unveiled a new stamp honouring Chloe Cooley, a young Black woman who was known to challenge her enslavement in the late 18th century.