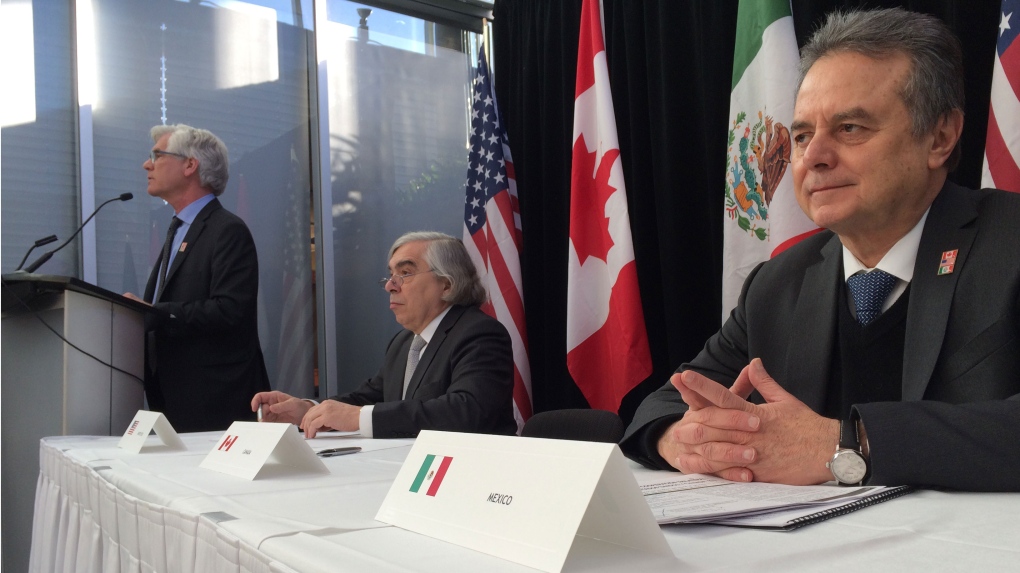 WINNIPEG -- Canada, the United States and Mexico have agreed to share data and maps as they work towards green energy security for North America.

Canadian Natural Resources Minister Jim Carr says the three countries can't risk being left out in the cold by global forces beyond their control.

"We've been working together here to co-ordinate our abundant energy resources better and to ensure we're the ones taking the lead internationally," he said after he and his two counterparts signed the agreement Friday.

"This is significant because it allows us to think of continental energy integration in a new light."

Carr says the countries are committing to work together in key areas that include bringing more renewable energy onto the electricity grid, speeding up innovations in clean energy technologies and advancing competitiveness in carbon capture and storage.

The deal was announced after a day of meetings between Carr, Mexican Secretary of Energy Pedro Joaquin Coldwell and U.S. Secretary of Energy Ernest Moniz, representatives of industry associations, non-governmental organizations and energy regulators.

Prime Minister Justin Trudeau has said a continental energy strategy will be up for discussion when he meets with President Barack Obama next month.

As the ministers were signing the agreement, a young man protesting the Energy East pipeline stood up and unfurled a small banner that read "Keep It In The Ground."

He was allowed to say his piece before he was escorted out by security.