A meeting is on the books for officials to discuss large groups of people illegally crossing the border near Emerson, Man.

"I know there are criminals coming across, that's the concern, people walking through town," said Janzen in a phone call with CTV News Thursday morning.

“How can we make everyone feel safe and comfortable?” he said. “How do we deal with bigger and bigger groups crossing?”

Janzen said the cost and strain on local emergency responders is also an important issue that needs to be addressed.

Emergency Coordinator Brenda Piett said Monday at least three women, a pre-teen girl and a baby, were among the most recent group. Piett helped organize the effort to open a temporary shelter on Saturday.

Over the weekend, RCMP said 22 people illegally crossed the border near Emerson. The last weekend in January, Manitoba Interfaith Immigration Centre said 10 people made the journey.

Chahal said Monday the meeting to visit the border town is to speak with locals to answer questions and figure out ways to work together.

“At the end of the day this is about human lives,” she said.

Emerson MLA Cliff Graydon will be also be attendance at the meeting, as well as department officials from the Government of Manitoba who deal with immigration issues. 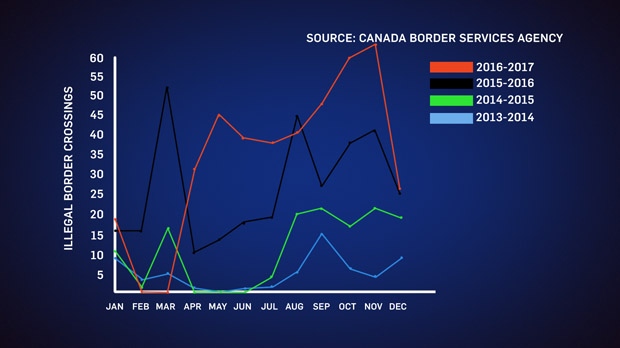 Conservative caucus concerned:
Thursday the Manitoba Conservative Caucus in Ottawa said it is concerned about the surge in illegal border crossings from asylum seekers near Emerson.

"Canada is a safe and welcoming country, but we must also take steps to protect our border and ensure the process for entering our country is consistent and fair for all seeking refuge in Canada,” the Conservative caucus said in a statement.

They are concerned the illegal crossing rewards people entering, and acts as a disincentive to the people following the legitimate process.

“There’s reason to believe that the number of illegal crossings from asylum-seekers will continue to grow.  While asylum-seekers may have good reasons to cross the border, our system should encourage all claimants to go through the proper channels.”

Provencher MP Ted Falk hopes a  plan is developed before the weather warms up.

He said it is important to look out for the safety of the people crossing the border illegally in cold temperatures, and people living in local communities near the border.

He said he’s aware the municipality in Emerson-Franklin wants help covering the cost of the people arriving in Manitoba, and knows workers at the Manitoba Interfaith Immigration council are stretched.

“It’s important we protect the integrity of our border, and we don’t know who is always crossing our border. Sometimes they got a really good reason to cross the border, but sometimes they are also fleeing other things,” Falk said.