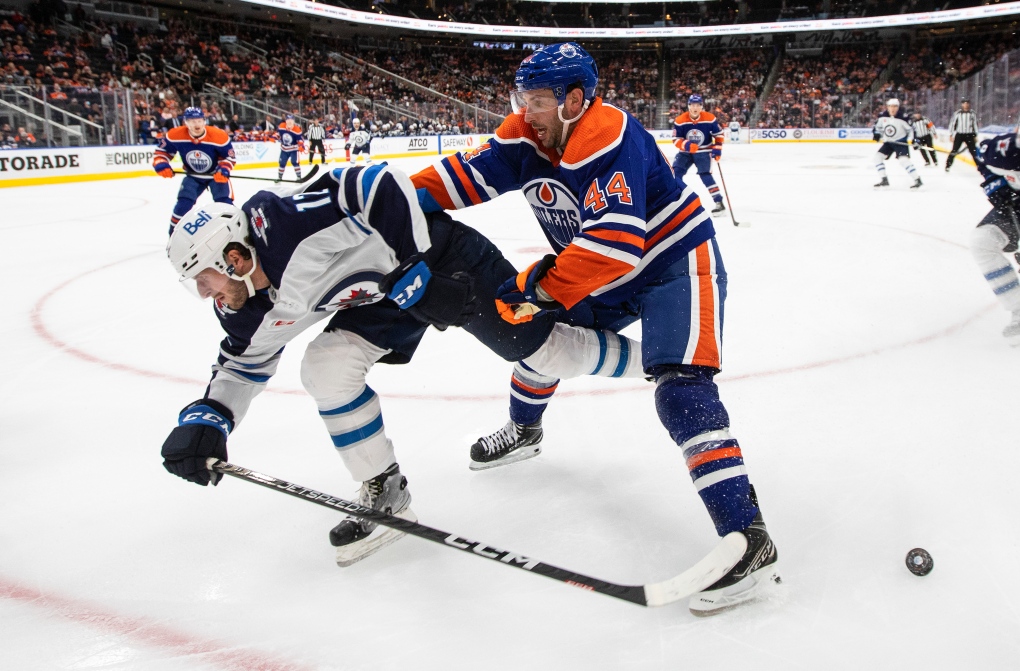 Stuart Skinner looks ready to make the permanent move up to the big leagues with the Edmonton Oilers.

Skinner and Calvin Pickard combined to make 29 saves for the shutout as the Oilers started what is anticipated to be a season packed with potential with a 4-0 victory over the Winnipeg Jets in NHL pre-season play Sunday.

"Once I got my legs under me, I felt pretty good," said the 23-year-old Skinner, who has been slotted in as the likely backup to Jack Campbell this season. "After any game you don't want to get too high on yourself or too low. Especially the first game in pre-season. I thought it went well, but I still have a lot of work to do.

"It definitely felt like I moved a little better because I was working on my skating all summer. That's nice to feel."

Markus Niemelainen, James Hamblin, Ryan McLeod and Dylan Holloway scored for the Oilers, who are 1-0 in exhibition action.

Oilers head coach Jay Woodcroft said Holloway had a strong showing as he attempts to secure a starting job.

"I thought he was really good. The powerful stride in his ability to separate from his check, and I thought he was physical," he said. "He showed up in offensive chances for us and was a big reason the penalty kill had the success it did tonight.

"The energy was there," said Jets head coach Rick Bowness. "Our puck management gave them a couple of goals and we had the inability to score goals when we had the opportunity. When that happens you end up beating yourself, which we did. But the energy was good."

It didn't take long for the Oilers to start the scoring as Niemelainen snuck in from the point and took a Brad Malone feed before blasting a puck past Jets goalie Rittich just 41 seconds into the opening period.

Edmonton had 13 shots in the first, with the Jets matching that total on Oilers starter Skinner.

Winnipeg had a great opportunity to pull even with a two-man advantage midway through the second period, but Skinner proved up to the challenge, including making a big glove save on a hard Kyle Capobianco shot.

Rittich also came up big in the middle frame, making a point-blank stop on Oilers' 2020 first-round draft pick Holloway, who was buzzing all over the ice.

Skinner made 19 saves before being replaced by Pickard late in the second.

Edmonton extended its lead midway through the third period as a huge rebound from a Jason Demers' shot came out to Hamblin who sent his shot home before Rittich could get back across. Demers is attending training camp on a PTO.

The Oilers then scored a pair of goals in the span of 27 seconds with five minutes to play.

A puck popped loose in front of the Winnipeg net and McLeod was able to chip it over the Jets goalie and then a rocket from the point from Evan Bouchard ticked off Holloway and in.

The Oilers are right back at it Monday against the Kraken in Seattle. The Jets return home to face the Ottawa Senators on Tuesday.

This report by The Canadian Press was first published Sept. 25, 2022.

Grant Wahl, one of the most well-known soccer writers in the United States, died early Saturday while covering the World Cup match between Argentina and the Netherlands.

Phase 1 of Canada's single-use plastics ban comes into effect this month. These are the products on the list

The search for a Washington state woman whose husband couldn't find her after spotting a shark while they were snorkeling in Hawaii was called off Friday.

Google's top trends: What did Canadians search for in 2022?

As we approach the new year, Google is providing a glimpse at what 2022 looked like for Canadians, based on the most popular search terms entered on the site.