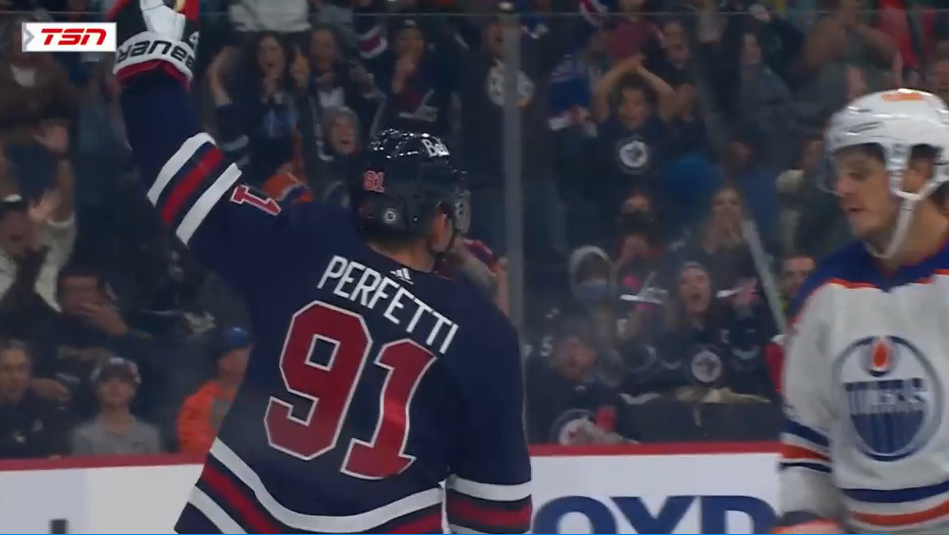 Cole Perfetti scored a pair of goals for the Jets. (Source: TSN)

Skinner not only stopped 33 of 35 shots, but he shut them out in both overtime and the shootout as the Oilers beat the Jets 3-2 in an NHL pre-season shootout before 14,190 fans at the Canada Life Centre on Saturday night.

"He wants to continue to have a real good training camp because he knows it's an important year for himself and for our team," said Oilers coach Jay Woodcroft. "I think he's ready for the opportunity. Obviously, he played a great game tonight and gave us a chance to win. He made numerous big saves and, in the end, we found a way to make one more save than the other team."

The Oilers improved to 3-2 in pre-season.

"I thought I played well," Skinner said. "Obviously, it's the first (65)-minute game I got to play. Just coming into regular season and feeling good, and making sure your body feels good is important, especially going into a shootout as well."

Oilers forward Devin Shore scored the only goal in the shootout, but he credited Skinner for the victory.

"Stuart's awesome," Shore said. "The guys in front of him worked our butts off, but he definitely stole us the win here. He was our best player and we're going to need that from time to time, especially on the road."

Jets goalie Connor Hellebuyck made 23 saves on 25 shots as Winnipeg fell to 2-1-1 in pre-season.

Forwards Jason Demers and Tyler Benson netted the other Edmonton goals. Cole Perfetti scored a pair of goals for the Jets.

"I'm happy, I need games," Perfetti said. "I haven't played since February before the rookie tournament, so I needed games, I need to get up to speed and to make sure everything is good with the (back) injury. The health and all that is the most important thing.

"It's been great. I'm getting back to speed. Each game I've felt better and better. That's kind of my focus, for each game to find something and take that next step forward.

"I've liked my game, how it's evolved throughout the rookie tournament and throughout the first three pre-season games for me. I like playing in the games. It's a little tiring, but at the same time, you want to stay at that speed and you don't want too many days off."

Veteran forward Blake Wheeler has been impressed by Perfetti, who played on the same line.

"Great hockey sense," Wheeler said. "He's a real smart player and can make plays and can go to the right spots. He thinks the game at an NHL level. He's going to be a guy that's going to be a lot of fun to watch here for a long time."

The Oilers had forced the overtime when Demers scored to tie the game 2-2 when Edmonton had a two-man advantage midway through the third period.

Winnipeg will welcome the Calgary Flames to town on Wednesday.

This report by The Canadian Press was first published Oct. 1, 2022.

A new list by OpenTable shows the 100 "most beloved" Canadian restaurants in 2022, based on more than one million reviews.

Canadian tourists may not be able to claim trip cancellations to Jamaica amid violence on island, travel expert warns

Despite Jamaica’s prime minister recently declaring a widespread state of emergency following a surge in gang violence and murder on the island, a travel expert warns that Canadian travellers may not be granted cancellation claims for travel insurance policies.