Omicron wave may have peaked in Manitoba: top doctor

Manitoba’s top doctor says the worst of the Omicron variant wave may have already passed in the province.

“We are nearing a critical juncture again,” Roussin said. “Based on several data points, it appears that the Omicron wave may have peaked or is in the process of peaking or plateauing in Manitoba.”

Despite this, Roussin said Omicron is still spreading in the community, and the health-care system is feeling its effects, though he added there are indicators these effects are stabilizing. 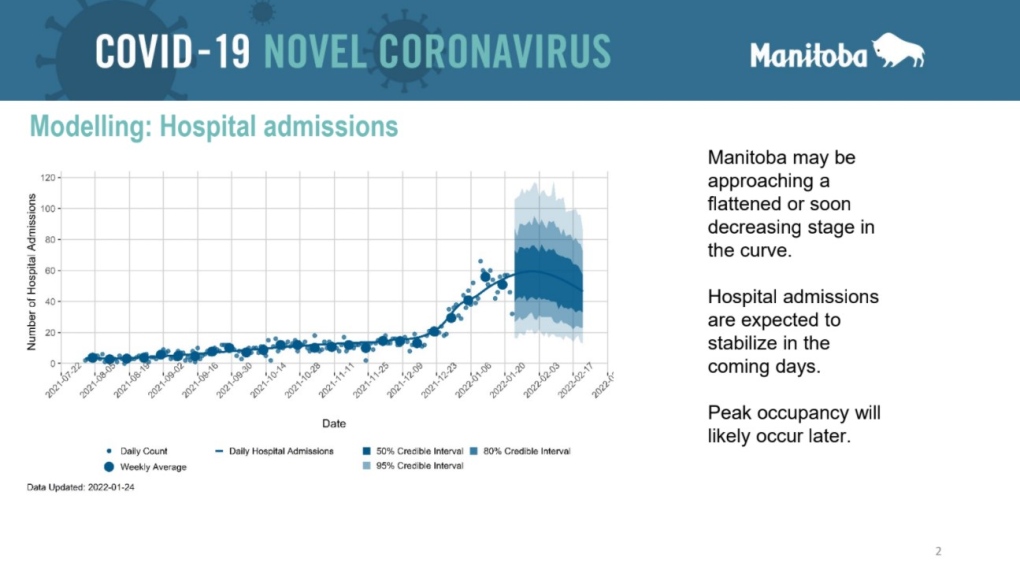 COVID-19 modelling data released by the province of Manitoba on Jan. 28, 2022. (Source: Province of Manitoba)“We are seeing some indicators of that plateau, but we need to look further at this data, have more time to see these trends, and be able to make more informed decisions on these public health orders,” he said.

This comes as the province announced it will be extending the current public health orders by one week.

“A week may not seem like a long time, but at the juncture we’re in, it’s going to provide us, likely, with significantly more information.”

Roussin advised Manitobans to “stay the course” and keep following public health orders. He advised people to get vaccinated when they’re able to do so.

Dr. David Matear, health system co-lead of the Unified Health Sector Incident Command, said as of Friday, 714 Manitobans were in hospital being treated for COVID-19, an increase of three from Thursday.

Of the current hospitalizations, 606 patients have active COVID-19 cases.

A spokesperson for Shared Health told CTV News as of midnight, there are were 110 adult patients receiving intensive care, as well as seven patients in the pediatric intensive care unit.

Shared health said 52 of the adults in the ICU are COVID-positive, along with two patients under the age of 10 in the pediatric ICU.

“A reminder that our baseline capacity pre-COVID was 72 patients,” he said. 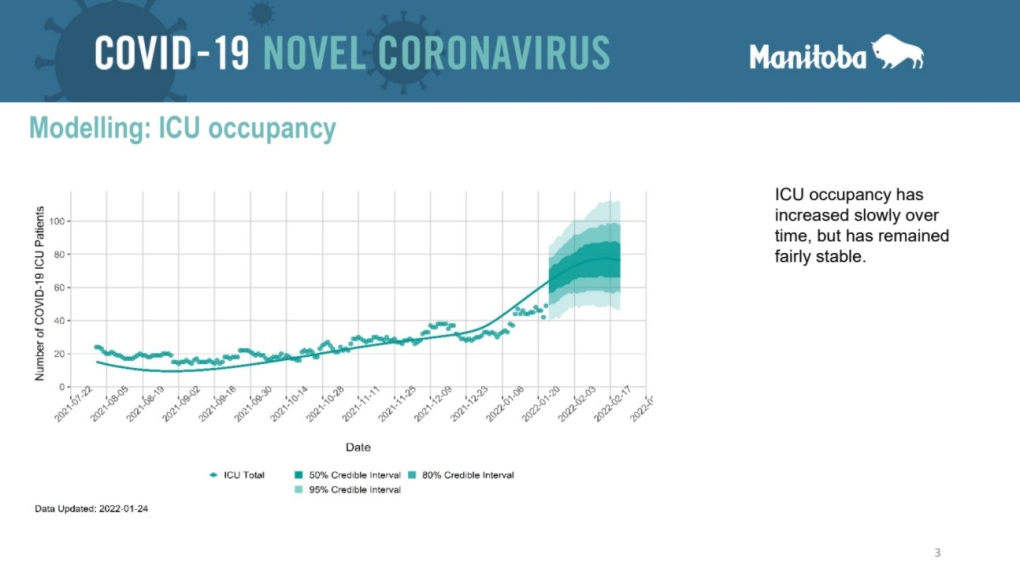 During the week of Jan. 7 -14, the number of hospitalizations 75.3 per cent, while the following week saw a 29 per cent increase. This week, the increase in hospitalizations was seven per cent.

Five of the deaths are linked to outbreaks, including.

Since the pandemic was declared in March 2020, 1,543 deaths have been reported.

The province added 898 new COVID-19 cases Friday. Health officials have previously stated that not all cases are being recorded as those who test positive on a rapid test are not reported, and therefore, the case count is likely higher.

A total of 1,722 tests were completed, and Manitoba’s five-day test positivity rate is 32.1 per cent.