One of two suspects in Grand Rapids assault arrested in Winnipeg 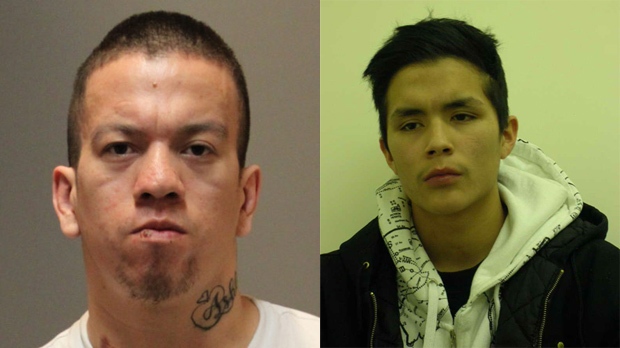 Police issued warrants for the arrest of Kelsey Ballantyne (left) and Alex Sanderson in connection with a shooting in Grand Rapids on Dec. 11, 2015. Police arrested Ballantyne in Winnipeg on Sunday. (Photos courtesy of RCMP)

Winnipeg police have arrested one suspect in a violent incident that sent two people to hospital in Grand Rapids on Friday.

Police responded to a call about a shooting at a business on Dec. 11 around 1:30 a.m. They found one man with a gunshot wound and another with serious stab wounds.

Neither man suffered life-threatening wounds, police said. Both suspects had fled the scene by the time police arrived.

On Saturday, RCMP put out  a warning that two people wanted in connection with the incident might have fled to Winnipeg.

Early Sunday morning, members of the Winnipeg Police Service Tactical Team were called to a Keewatin Street establishment around 2:30 a.m. They found one of the suspects, 26-year-old Charles Kelsey Ballantyne, in the parking lot and took him into custody.

Winnipeg officers transferred Ballantyne over to the RCMP, who charged him with attempted murder without a firearm, aggravated assault, possession of a weapon for dangerous purposes, and failing to comply with a probation order.

Alex Sanderson, 22 from Grand Rapids remains at large and police warn he could be armed and dangerous.

Police ask the public not to approach him, but to call 911 immediately if seen.