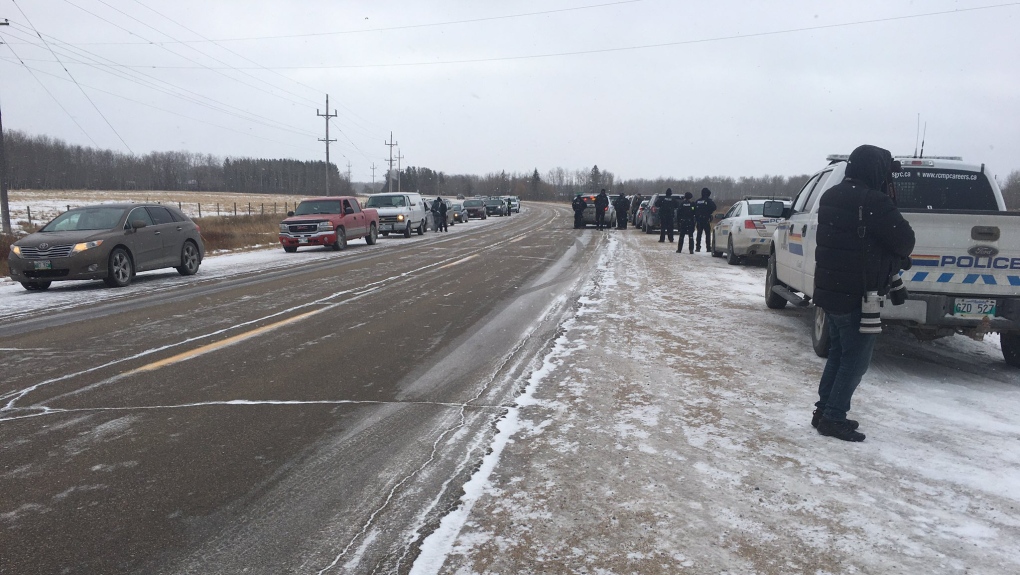 Parishioners at Church of God Restoration, lined the side of the Highway 12 as RCMP cruisers blocked the parking lot Sunday morning. (Source: CTV News/Touria Izri)

WINNIPEG -- RCMP handed one fine out on Sunday morning at a church near Steinbach, Man. that was planning a drive-in service.

The service was thwarted when RCMP blocked the church's parking lot entrance.

About 100 parishioners at Church of God Restoration lined the side of Highway 12 as RCMP cruisers blocked the parking lot.

"Steinbach RCMP were aware of the intentions of the Church of God to hold services this morning that would violate current Province of Manitoba Public Health Orders," said an RCMP spokesperson in an email to CTV News. "We sent out a notice on Friday to advise people what those orders entail in the hope they would not gather."

Under public health orders, places of worship are not allowed to be open, including for drive-in service. Groups can also not exceed five people inside or out.

RCMP said only one fine was given but the investigation is continuing and more could be handed out.

"Most of the parishioners, but one, understood the message and returned home," said the RCMP spokesperson in an email. "The one adult male stated he wished to continue on and was given a $1,296 fine."

Church of God Restoration was fined $5,000 when it held a service a week prior.

Tobias Thissen, a minister at the church who received two $1,296 tickets from RCMP last week, one for the church and one for speaking at an anti-mask rally, did not want to comment but said he's going to fight the fines he's received in court.

The situation at the church was largely peaceful except for when churchgoers exited their vehicles and blocked a tow truck from passing. Eventually, the tow truck backed away.

Tense scenes at the drive-in service, after a tow truck moved into clear a vehicle in the middle of the highway. The tow truck eventually backed off. @ctvwinnipeg pic.twitter.com/B848BoCzHx

The province said an update would be made on Tuesday about enforcement numbers.

"It is incredibly disappointing that any church would blatantly disregard the public health orders in place to protect Manitobans," said a spokesperson for the premier in an email.