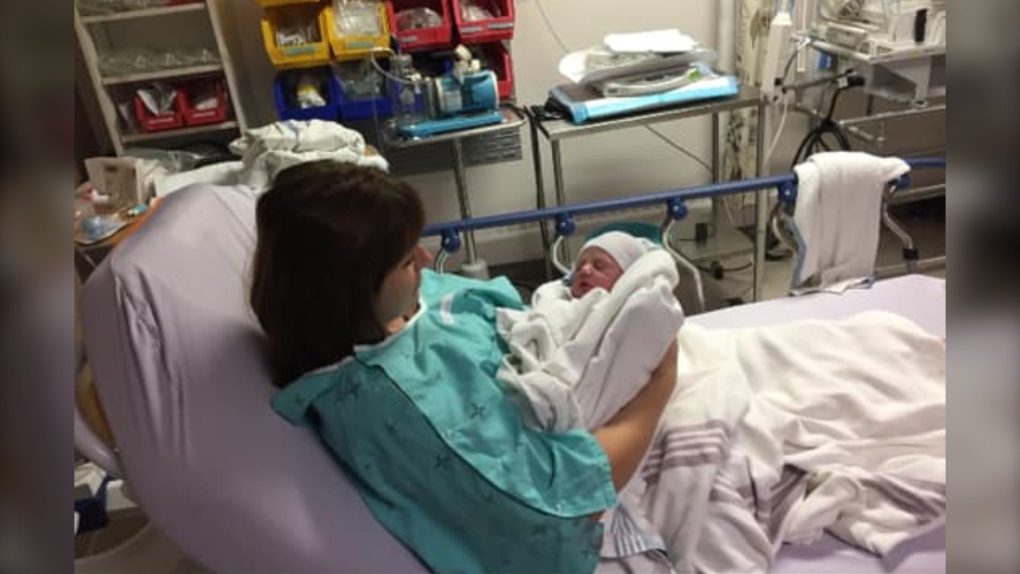 A Manitoba mother is sharing her happy, yet harrowing story about the birth of her son during the wicked snowstorm on Oct. 12, 2019. (Source/Ashley Lindell)

A Manitoba mother is sharing her happy, yet harrowing story about the birth of her son during the wicked snowstorm last weekend.

Ashley Lindell lives near Eriksdale, about 140 kilometres north of Winnipeg, in one of the hard hit areas of the storm.

The now mother of five said her labour pains began around 3:30 a.m. Saturday, Oct.12. As soon as she and her husband left, they encountered trouble getting out of the driveway.

“There were trees and the snow was very deep,” said Lindell in a phone call with CTV News.

Lindell said they decided to go to the local hospital nearby in town, instead of Winnipeg because the roads were so terrible.

‘We’re lucky we made it there. It was super rough and we were breaking trail to get to the hospital,” Lindell said.

When the couple arrived, Lindell asked about getting a transfer via ambulance to Winnipeg, but said she was told EMS wasn’t running.

“That’s when the power went out,” she said. ‘The labour pains picked up really fast.”

On the upside, there was a doctor on site and staff were snowed in.

Lindell said over the next three hours, the power would come and go.

“Everything had to run smoothly,” she said.

“We were operating on minimal light."

"I believe we all had our cells handy for light in case," Lindell said. "Other than that, it was pretty dark.”

Lindell said she is  thankful for the backup generator.

Lindell, who is also a health care worker at the local hospital is relieved and thankful for quick witted staff that sprung into action, she said.

Lindell said the facility is not equipped to do epidurals, another reason she is so thankful the birth turned out well.

“If we had tried to go south, that baby would have born in the truck,” said Lindell.

“It was the perfect storm. To be able to say that your co-workers safely delivered your baby in your small town ER,” she said.