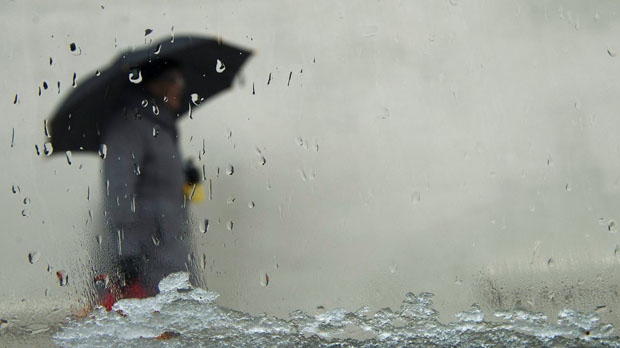 A pedestrian walks with an umbrella in rain in this file photo.

WINNIPEG -- In advance of heavy rainfall expected to start Saturday night, the Government of Manitoba is warning parts of the province about the possibility of flooding.

The storm could produce overland flooding and high water conditions in the northern and southeast regions of Manitoba. The government said areas could receive up to 60 millimetres of precipitation.

Northern areas, like the Saskatchewan River and the Churchill River watersheds, could see 50 to 70 mm of precipitation. Some northern regions are already reporting very high water levels and currently have high base flows and soil moisture.

The Red River basin could receive up to 50 mm of precipitation. However, there is no high water concern as the Red River has capacity.

The risk is low in most other portions of the province.