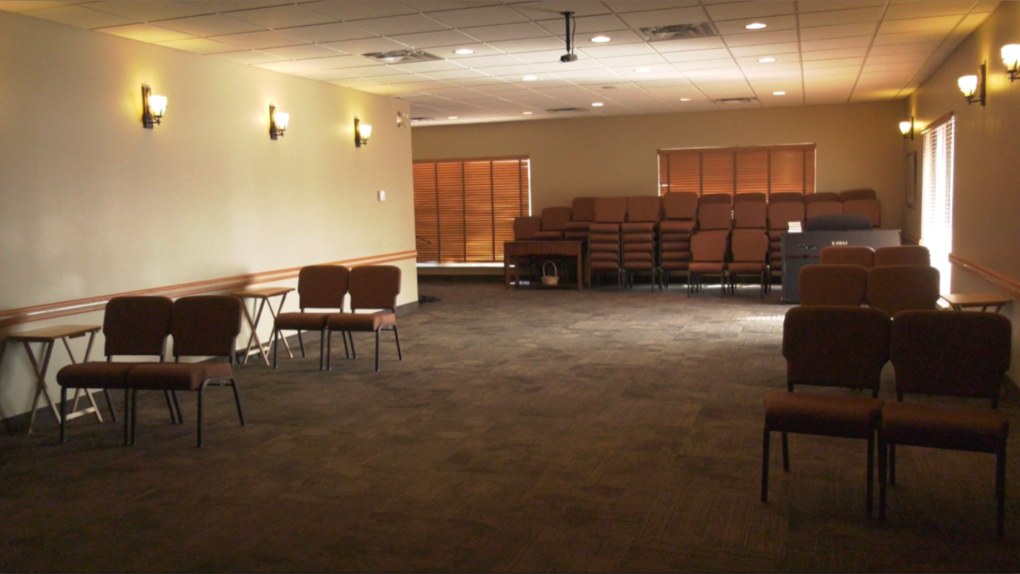 Chairs are spaced out inside the chapel at Friends Funeral Service in Winnipeg, Man. Up to 10 people are allowed to attend funeral services held in Manitoba under COVID-19 restrictions. (Source: Josh Crabb/CTV News)

WINNIPEG -- Nearly a year into the pandemic, certain parts of people’s lives remain on hold, including saying goodbye to a loved one.

Limits on gatherings and funerals have hampered the normal community response to a death. And for some that’s dragging out the grieving process.

Under normal circumstances, Larry Baillie would’ve been welcoming family and friends into his River Park South home. His dad Glenn and brother Bill have both died during the COVID-19 pandemic but measures aimed at preventing the spread of the virus have delayed their memorials and Baillie’s grieving process.

There are restrictions on group gatherings, indoor visits and funeral services. They’ve been replaced with phone calls and care packages dropped off at Baillie’s door. He’s thankful for the support but he said it’s just not the same as meeting face-to-face.

“Another thing you can’t do, and you can’t do it even now—we can’t hug. We’re not allowed to hug,” said Baillie.

Up 10 people can attend funerals in Manitoba while following COVID-19 protocols.

Harry Froese, funeral director at Friends Funeral Service, said deciding who gets to attend is taking a toll on families. He wants the province to revisit the rules.

“The number 10 is seemingly so arbitrary and so limited given the fact that there are many families that have more immediate family than the 10,” said Froese.

Froese would like to see capacity increased to at least allow all close family members to attend. With capacity increasing Friday to 25 per cent or 100 people at places of worship, Froese feels more people should be allowed to attend funerals held in larger venues, as long as family groups are kept apart.

“Give us the freedom to do what is safe but include the people that need to be included,” said Froese.

Public health officials have previously said there have been cases linked to funerals. The Manitoba Funeral Service Association said overall, services have been operating safely.

Baillie is hoping to hold an outdoor memorial for his dad and brother in Canmore, Alta. this summer.

He knows even doing that is no guarantee but he wants to give all friends and family a chance to attend.

“In order to do it fairly, we must do it in a time where travel restrictions are lifted,” said Baillie.

Froese said for families that have gone ahead with services, doing visitations by ushering in groups of no more than 10 in the chapel at a time has been one way to deal with the restrictions. The province said that’s allowed as long as there’s no interaction between the groups.

Funeral directors have also been streaming services online throughout the pandemic, which has given those who can’t attend in person a chance to participate from a distance or watch or listen from their cars outside the chapel.

But for some, streaming a service virtually isn’t the answer and they’re going to wait until they can get together in person.