Parents push to have EpiPens readily available in all Winnipeg schools 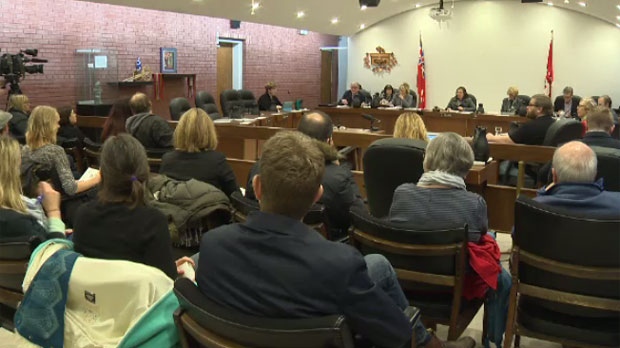 In a ten minute presentation in front of the Winnipeg School Division School Board Monday night, Nazarko explained why she thinks Epipen cabinets—similar to defibrillator cabinets—need to be installed in Winnipeg’s schools.

A push to have Epipens at all schools made its way to the Winnipeg School Division School board meeting Monday.

Orla Nazarko’s 6-year-old daughter has a life threatening peanut allergy. She sends her daughter to school every day with a fanny pack containing an Epipen, but wonders what would happen if her daughter lost it or took it off because she’s embarrassed about having an allergy.

“In a perfect world kids would always have their Epipens with them but we don’t live in a perfect world,” Nazarko said. “We need to have a backup because a kid could die in six minutes from a life threatening allergic reaction. And that’s before an ambulance can even get to a school.”

In a ten minute presentation in front of the Winnipeg School Division School Board Monday night, Nazarko explained why she thinks Epipen cabinets—similar to defibrillator cabinets—need to be installed in Winnipeg’s schools. Her vision is to launch a pilot project to see in alarmed Epipen cabinets in school hallways. Each would contain two Epipens and would cost $250 to install and $200 to stock the cabinet each year.

Winnipeg School Division’s current policy says staff trained to use Epipens can “only administer medication that’s been prescribed.” A school division spokesperson said schools work with parents to come up with a plan for children with Epipens, and kids can either carry the Epipens themselves or staff will keep the injectors in a safe place.

Sherri Rollins, Chair of the Winnipeg School Division, said the division had already started discussing its policy on Epipens and questioned if a pilot project is necessary.

“You heard me ask a question tonight about whether or not the speakers were married to a pilot.” Rollins said Monday. “We’ll want to talk to some of the experts that came tonight… and talk to the province.”

Nazarko points out how nearly 60 schools in Quebec, New Brunswick, Nova Scotia, and PEI already have Epipen backups on hand in case of emergency.

“There’s been really big uptake in New Brunswick. They did see the death of a student from a severe allergic reaction there a few years ago. That really increased awareness,” Nazarko said.

“I think it would be great to see every school and division receive this tomorrow. We realize that there might be some cost and some logistical issues associated with doing that in a very quick manner,” said Nazarko.