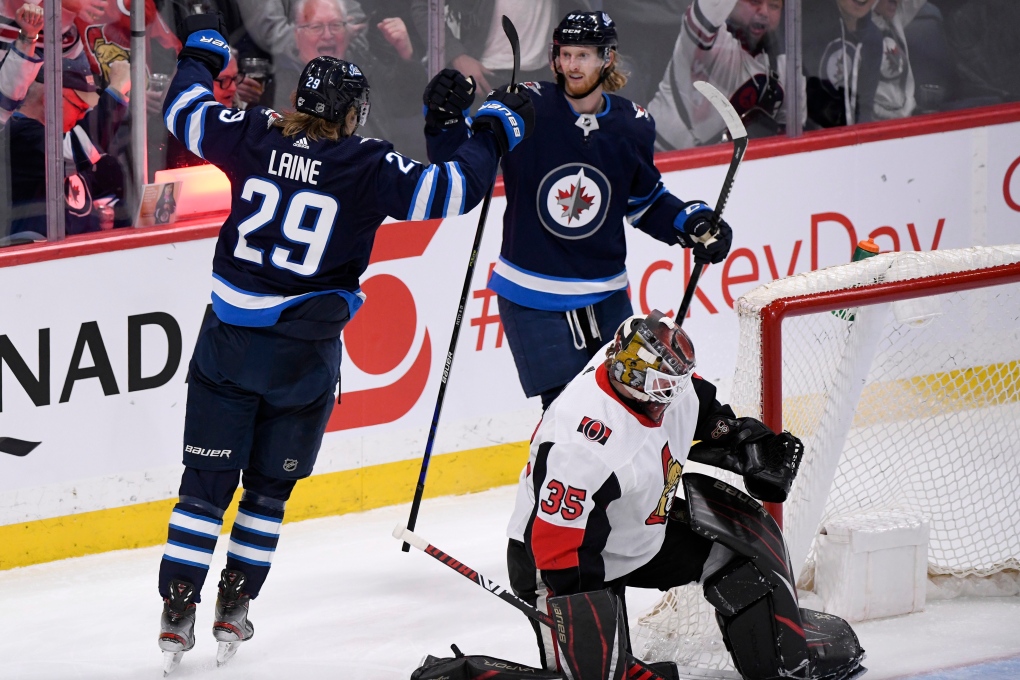 WINNIPEG -- Patrik Laine scored a hat trick with three power-play goals to propel the Winnipeg Jets to a 5-2 victory against the Ottawa Senators on Saturday afternoon.

It was Laine's eighth career hat trick and gave the Jets points in four straight games (3-0-1) after a five-game losing streak.

Kyle Connor scored once and added three assists, while Neal Pionk had one goal and two assists for Winnipeg (28-23-5). Blake Wheeler contributed a pair of helpers.

Laurent Brossoit made 25 saves for Winnipeg, which was beginning a season-long, six-game homestand.

Ottawa netminder Craig Anderson let in four goals on 22 shots before being replaced at the beginning of the third period by Marcus Hogberg, who stopped 11 of the 12 shots he faced.

Winnipeg led 1-0 after the first period and 4-2 after the second.

Pionk scored his sixth goal of the season when a one-timer from the point went past a screened Anderson at 8:48 of the first period.

With just under six minutes remaining in the first period, Senators forward Brady Tkachuk crushed Pionk against the edge of the boards between the two benches. Jets captain Blake Wheeler pulled Tkachuk away and the two started throwing punches.

Pageau netted his 21st goal of the season 25 seconds into the second period with a backhand swipe at the puck went by Brossoit to make it 1-1.

Winnipeg regained the lead at 7:49 just seconds after Nikolaj Ehlers exited the penalty box for tripping. Ehlers got the puck, sent a long pass to Connor and he beat Anderson for his team-leading 26th goal of the season.

The helper extended Ehlers's point streak to five games, with one goal and four assists during that span.

Laine put away his 21st goal of the season by banging in a rebound on the power play at 17:04 to make it 3-1, but then a costly Winnipeg turnover cut the deficit to one again.

Brossoit went behind the net and tapped the puck to Pionk beside him, but the defenceman passed the puck out directly to Boedker, who easily fired it into the net at 18:29 for his first goal of the season in his 10th game.

Laine made it 4-2 when he deflected in a Pionk shot with 12 seconds remaining in the middle frame and upped the score once more at 8:43 of the third.

It was Laine's first hat trick since he had a five-goal performance on Nov. 24, 2018 against St. Louis. He also surpassed last season's point total (50) with the third goal. He sits at 23 goals and 51 points in his fourth NHL season.

This report by The Canadian Press was first published Feb. 8, 2020.