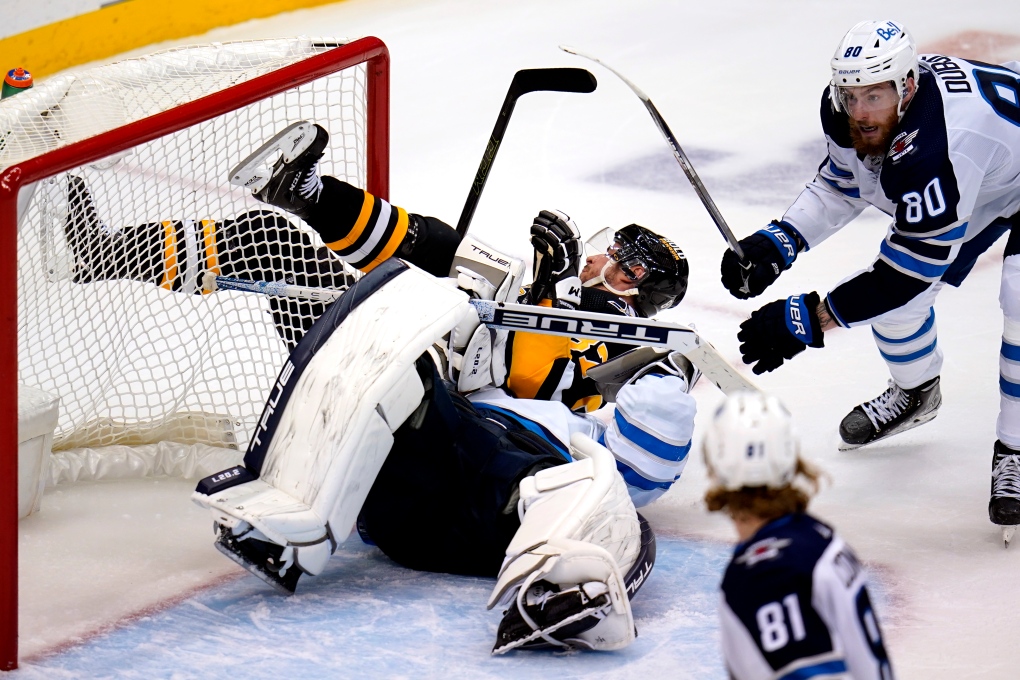 Pittsburgh Penguins coach Mike Sullivan isn't thrilled with what he's seeing on the ice these days.

The scoreboard is another matter.

Kasperi Kapanen and Jeff Carter scored nine seconds apart in the third period to erase a two-goal deficit and Sidney Crosby scored the only goal of the shootout as the Penguins rallied by road-weary Winnipeg 3-2 on Sunday for their fifth straight win.

Pittsburgh trailed for more than 40 minutes and spent far too much time chasing the Jets around PPG Paints Arena. It's not an ideal recipe for a team that wants to make a deep playoff run.

Still, Sullivan's team is competing amid the mistakes. For now, he will take it.

"I thought it was a high-event game on both sides and fortunately we found a way to win," he said. "But I don't think it was the game that we want to play most nights."

Another spectacular performance by All-Star goaltender Tristan Jarry, a fortunate bounce off Kapanen's skate and a miscue by Winnipeg's Connor Hellebuyck let the Penguins escape anyway.

Kapanen began the comeback by redirecting a pass from Evgeni Malkin to bring Pittsburgh within a goal 6:55 into the third period. The din had barely died down when Carter tied it after he knocked down Hellebuyck's clearing attempt and laced a shot into the open net before Helleybuyck could scramble back into position.

"We know we didn't play the right way the first two periods," Penguins defenseman Kris Letang said. "We went back to work. If we play a 60-minute game the way we did at the end, we're going to be on the right side of things."

Jarry, an All-Star for a second time, made 27 saves. He turned away several odd-man rushes in the first two periods, and then made a sprawling stop on Blake Wheeler in overtime.

Eight months removed from a meltdown in the playoffs against the New York Islanders, Jarry is one of the reasons Pittsburgh is in the thick of a tight race atop the Metropolitan Division at the season's midway point.

"He's a guy that lives in the present," Letang said of Jarry. "He's going to focus on doing the right thing in the moment."

The victory may have been the most unlikely of the Penguins' current seven-game run at home that began after a loss to Montreal on Nov. 27.

Kyle Connor scored his 22nd goal of the season for the Jets. Wheeler scored in his second game back from a lower-body injury that forced him to miss more than a month.

Hellebuyck made 36 saves, but Winnipeg finished 3-3-2 during a three-week journey that began on Jan. 2 and included contests in three different time zones.

"We were in a very good game today," Jets interim coach Dave Lowry said. "I like the resiliency that our group showed."

Despite playing their second game in less than 24 hours, the Jets hardly looked fatigued. Not so much for the Penguins who -- despite being given Saturday off following a win in Columbus on Friday night -- looked a step slow at times against a team that hasn't played inside its own arena in five weeks thanks to the COVID-19 pandemic.

Wheeler wasted little time giving the Jets the lead, taking a lead pass from Mark Scheifele and flicking a backhand over Jarry's glove 3:28 into the first period.

Winnipeg had a chance to double its advantage twice late in the period but Jarry turned away breakaways by both Connor and Wheeler.

Connor earned a measure of revenge 8:11 into the second when he collected a cross-ice feed from Paul Stastny and buried a laser from the right circle for a 2-0 lead.

Hellebuyck kept Pittsburgh at bay until midway through the third when Kapanen's skate created his ninth goal. Carter added his 12th on a shot from the corner just above the goal line.

"I just had a late decision because it looked like it was going to be icing for a second," Hellebuyck said after falling to 1-3-2 in his last six starts. "Then when I decided, my only play was to put it behind the net and they just have a guy side open right there. Just seems like my luck right now."