People in custody after police swarm street in Tyndall Park

NEWS -- A police spokesperson said a heavy police presence -- including an armoured vehicle -- in Tyndall Park was connected to an investigation involving a stolen vehicle.

At least five marked police vehicles could be seen in the area of Kinver Avenue and Fuga Bay Monday morning, and three people were seen being taken into custody. 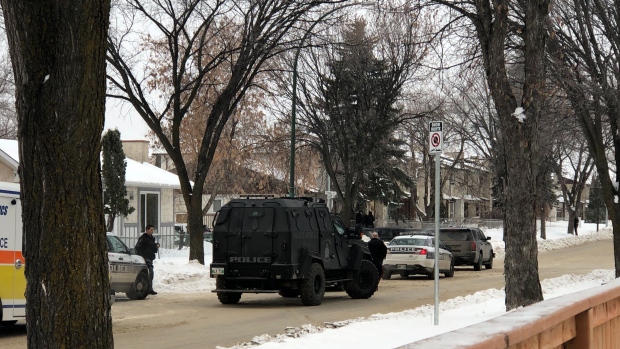 Police said the armoured vehicle was needed because they believed there may have been weapons inside a home they went to as part of the investigation and confirmed they had "numerous people in custody."

A nursery to Grade 8 school in the area -- École Stanley Knowles School -- was placed in a hold and secure due to the police presence nearby, said a spokesperson for the Winnipeg School Division. It ended at around 10:40 a.m.

Shortly after 11 a.m., police said the scene is being cleared.

Police and emergency services are currently on Kinver Ave, focusing on a home at Fuga Bay. Residents are not allowed through the block. Neighbours say the block was the scene of a homicide investigation in October: https://t.co/KF8PeH5H5Z@ctvwinnipeg pic.twitter.com/o4YPFFwLcg

-With files from CTV's Alex Brown