WINNIPEG -- Cell tower maintenance crews rescued an endangered Peregrine falcon trapped inside the top of a cell tower over the weekend.

“They at first heard something strange. So, as they were up in the top, they looked down and saw that there was a Peregrine falcon,” said Nakata.

She said the crew was told by their main offices in Toronto to do whatever they had to get the falcon safety out.

“We sent a team over ready to take the bird when she was out,” she said. 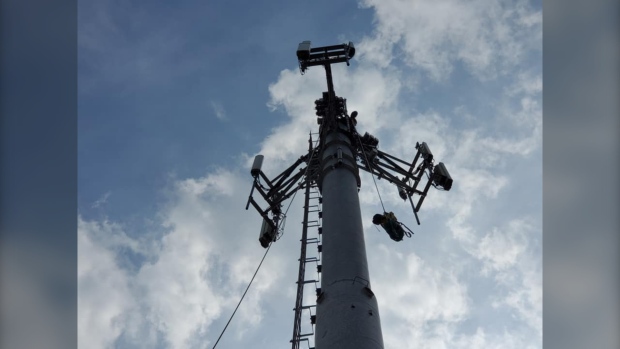 Nakata added the work crew first tried to get the falcon out with a sling, but she jumped out. She said they tried a few other contraptions, but the falcon kept jumping out. That’s when they decided someone would have to climb the tower and pick her up.

“One of the maintenance crew members actually rappelled down inside the tube all the way down,” she said. “Our team had given him some tips on how to take the falcon, successfully get her into a canvas bag, and climb all the way back up. And then, all the way down the outside of the cell tower.” 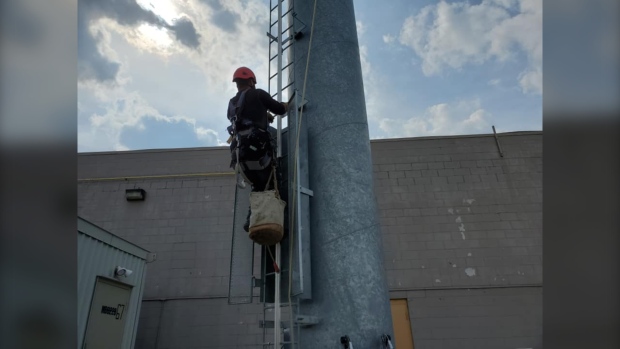 The towers, she said, are shaped like a big tube with a four foot (1.21 metres) diameter. But, if a falcon goes into the tower, she said there is not enough room for it to get out.

“A falcon, and most birds, they’re shaped more like an airplane, not a helicopter. So, an airplane you need the runway to get the height you need, and for a falcon, it’s very much the same thing,” Nakata said.

The female falcon was weak and dehydrated, Nakata said. But now she is in pretty good health.

“We’re looking for a release probably within the next week which will be fantastic,” said Nakata.

As an endangered species, it is really important they get her back out into the wild, said Nakata.

“Every time that we can save one of these, especially a mature female, which we suspect she is, it has the potential for offspring, the stakes are a little bit higher,” she said. “Because you know that every single one of them that we save could have a huge impact on the numbers here in our province.”

Nakata said the Manitoba Peregrine Falcon Recovery Project confirmed the rescued falcon is not one of theirs. She said they will put a band on the falcon before releasing her back to the wild so they can follow her journey. 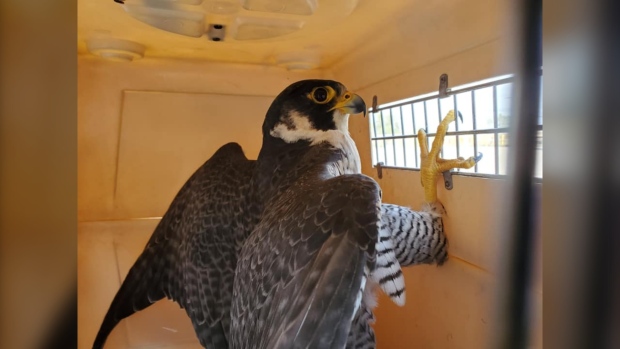 The Peregrine falcon shortly after being rescued from the tower (Facebook: Wildlife Haven Rehabilitation Centre)