Plan for Kapyong Barracks site calls for mix of housing, commercial and recreation 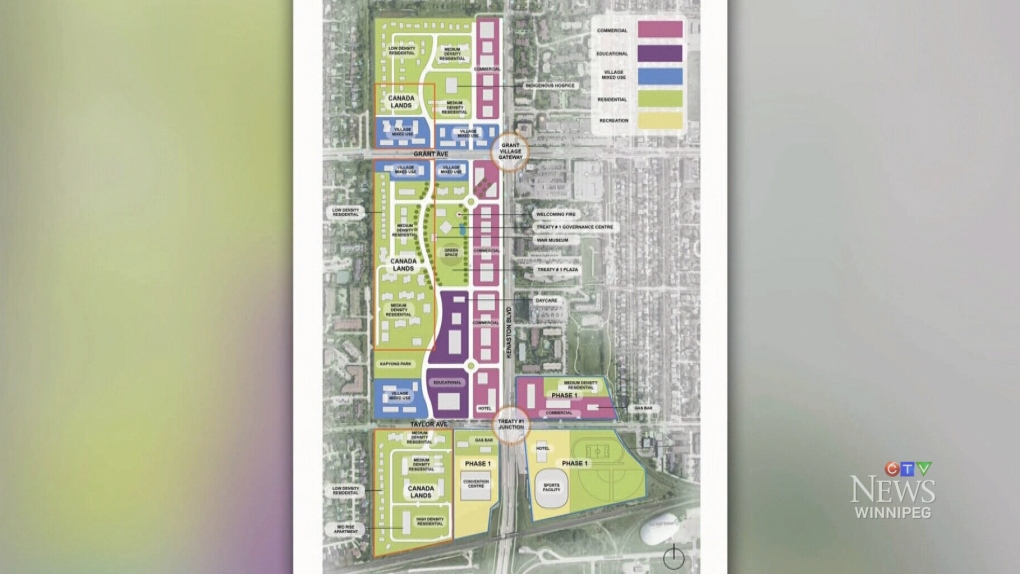 A new rendering is giving a glimpse into what kind of buildings could rise in place of the vacant Kapyong Barracks.

The First Nations group, Treaty One First Nations, which negotiated an agreement with Ottawa to create an urban reserve has released its preliminary plan for the land.

The site could include new housing, commercial buildings and sports facilities on the former military base.

"I'm very relieved that we're able to bring this out so we can now generate some interest on what Kapyong holds for the future,” said Long Plain First Nation Chief Dennis Meeches.

The agreement in principle would see 110 acres of land on the Kapyong site go to seven Treaty One First Nations with the federal government keeping the remaining 50 acres.

At the corner of Kenaston Boulevard and Grant Avenue, the rendering calls for a mix of medium density and low density residential housing, commercial buildings and an Indigenous hospice.

Between Grant Avenue and Taylor Avenue, the rendering shows an Indigenous war museum, a daycare, educational facilities combined with more housing and commercial buildings including a hotel and gas bar.

South of Taylor Avenue the plan calls for a convention centre, sports facilities and plans for a second hotel and gas bar.

"This is the first offering,” said Meeches. “It's not set in stone, obviously. We're going to go through a consultation process with the Treaty One people."

"It's more rec. than I thought, recreation services, and a lot more community services than I expected,” said Orlikow. “I think it'll be very well received."

Meeches said the Treaty One group has to negotiate a municipal services agreement with the city and finalize the agreement with Ottawa before its vision can become reality.

Demolition of the current buildings also needs to be completed and Meeches said there will be a public consultation process for area residents to provide input.

As for when the new facilities will rise, Meeches said a key date is Aug. 3, 2021 — the 150th anniversary of the signing of Treaty One.

He said he'd like to at least some of the urban reserve up and running by that date.