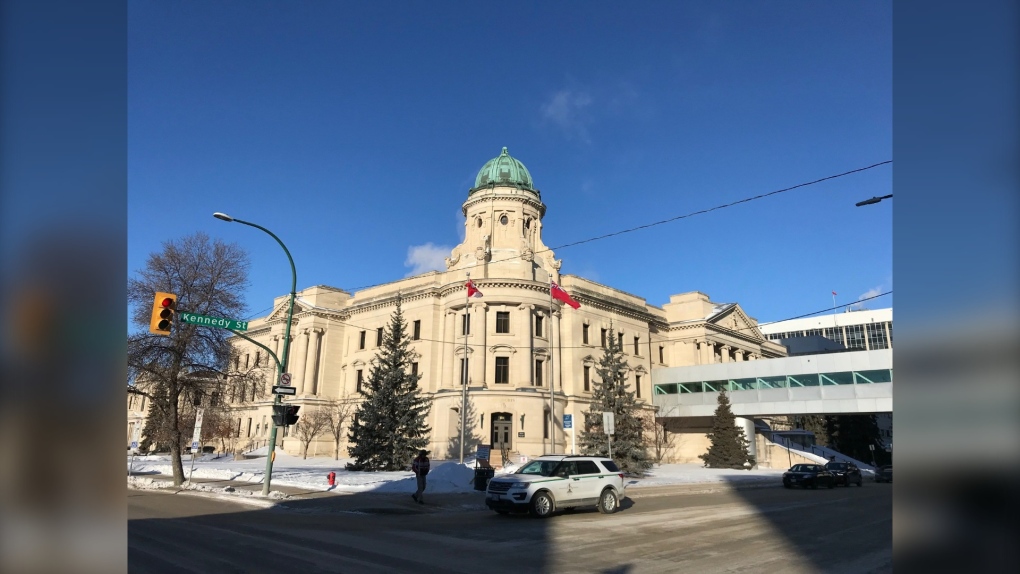 WINNIPEG -- A Manitoba court heard the first testimony from a man who says he was punched and kneed in the face during an arrest in Winnipeg nearly four years ago.

In Manitoba's provincial court on Monday, Jamie Cote said he recalled the details from the night of March 27, 2017—the night he says he was assaulted.

Winnipeg police officer Sean Cassidy has pleaded not guilty to an assault charge. The charge has not been proven in court.

During the opening day of trial, Cote told the court he and his roommate at the time had been delivering flyers in La Salle, Man. for his landscaping company. He said he had been driving a company vehicle marked with the company phone number and website.

He said nearing the end of the deliveries, he and his roommate stopped outside to have a smoke, which is when Cote said he noticed a van that appeared to be sitting and watching them.

Cote said they continued on to finish delivering to the last few houses and the van appeared to be following them.

He said at the final house, he put a flyer in the door and on his way back to the truck he saw the van sitting near the end of the drive way. He said he put his hands up gesturing at the driver to ask what was going on, but received no response.

Cote said as they went to leave La Salle, the van had sped in front of them and was swerving back and forth not allowing them to pass. He said he made attempts to pull up to the van to see what was going on, but the van would speed away.

He said this continued out of La Salle, along the Perimeter Highway and down St. Mary's Road.

Cote told court he and his friend attempted to flash other vehicles with their lights and were trying to call the non-emergency police line for help.

Video evidence submitted in court recorded by Cote on his phone shows a van swerving in front of him.

Cote said as he was driving down St. Mary's Road, he saw a police cruiser sitting in a parking lot. He said he pulled over and got out of his truck to flag them down. He said the van pulled up behind him, and the driver yelled at him to get back in the vehicle.

Cote said he was confused and put his hands up in the air, slowly backing up to his truck. He said at this point police arrived on the scene and a uniformed officer grabbed him by the shirt from the vehicle and put him face down on the ground.

“I just heard a stomp stomp, and I kind of looked up to my left and that’s when I started getting punched and kneed in the face,” Cote told the court, adding the person punching and kneeing him was not wearing a police uniform.

“After I was being punched and kneed in the face, I was yelling, ‘I’m not resisting. Please stop hitting me,’” Cote said.

He said he saw the uniformed officer pulling the person off him. Court heard Cote was put in the back of a police car, but was later released with no charges.

Cote said he was punched and kneed twice, leaving him with a fractured nose, a concussion and blood in his ears.

“My nose looked like a lightning bolt. My face was all swollen,” Cote said, describing his nose after the incident as “zigzagged.”

In her cross-examination, Cassidy's lawyer Lisa LaBossiere told the court Cote had many opportunities to turn away from the van both in La Salle and along the Perimeter Highway, and questioned why he did not call 911.

“You could have disengaged with the van numerous times and you chose not to,” LaBossiere said, alleging Cote was the one chasing the van.

“I'm going to suggest to you that after that point you continued to chase the van through several loops, through several turns, a bunch of times, going speeds up to 100 km/h cause you were pissed.”

Cote denied this in court.

LaBossiere also questioned Cote's memory of the incident pointing to discrepancies in a written statement provided to police in April 2018 and an interview with the Winnipeg Police professional standards unit in May 2018, and the testimony provided in court on Monday.

The trial is set to continue on Wednesday.