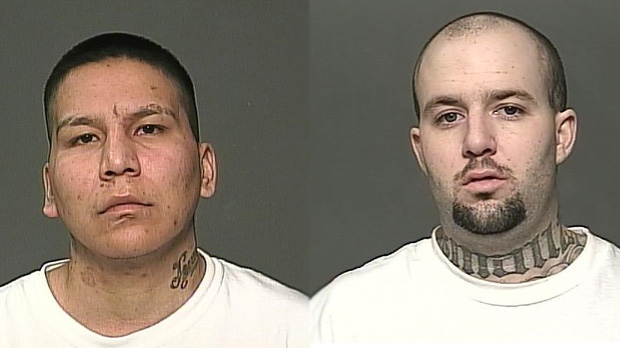 James Andrew Jewel is pictured here on the right, and Michael Taylor Fless is pictured on the left. (Source: Winnipeg police)

Winnipeg police have arrested one of two men wanted after a man was killed and two people injured in two separate shootings last November.

James Andrew Jewel, 26, was arrested Friday night. Police had put out a call for help finding him and Michael Taylor Fless, 30.

On Nov. 28, police were called to the 400 block of Pritchard Avenue after a man was found critically injured with gunshot wounds. The victim, 39-year-old Benjamin Franklin Traverse, was taken to hospital and later died from his injuries.

After Traverse was shot, police said two other victims were robbed, forced into a vehicle, and driven to the area of Raleigh Street between Glenway Avenue and Foxgrove Avenue in East St. Paul, Man.

The two victims were both shot and the suspects fled in the vehicle.

Fless is still at large. Police warn anybody who sees him not to approach, as he is considered dangerous and possibly armed. Anyone with information can call investigators at 204-986-6219 or Crime Stoppers at 204-786-TIPS (8477).