Police cars involved in 3 crashes Monday, including 1 that drew gunfire from officer 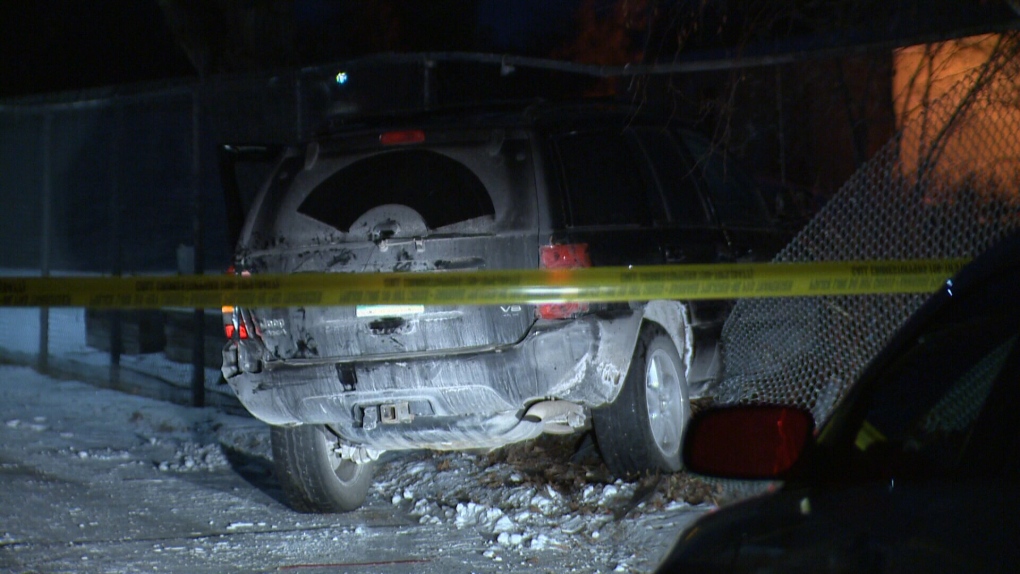 WINNIPEG – A crime scene that shut down a busy street in River Heights Monday evening was connected to an investigation that saw an officer fire their gun in an attempt to stop a vehicle police said was stolen.

It was one of three incidents that saw four police cars damaged by other vehicles Monday.

“So we’re seeing just this continuation of rampant lawlessness out there that’s really causing us some concern,” said Chief Danny Smyth of the Winnipeg Police Service.

Of the River Height incident, police said the vehicle -- an SUV -- was spotted by a street unit supervisor just after 6 p.m. Monday, near Pembina Highway and Point Road.

With help from another street supervisor, the officer tried to stop it, but it rammed both police cars and broke free.

An officer fired his gun in the scuffle, police said. They have not confirmed if anyone was or wasn’t hit.

“At this point, investigators will do what they do, they will check hospitals, everything else, if anybody comes forward with an injury, but at this point, we don’t have that information,” said Const. Tammy Skrabek.

A passenger inside took off on foot and the vehicle also took off, police said, eventually crashing into a fence in a lane near Brock-Corydon School.

Academy Road was closed between Ash and Oak Streets for the police investigation.

No arrests have been made and officers with the police service’s homicide unit are investigation.

“Anytime we have an office-involved shooting, it immediately goes to the homicide unit to investigate,” explained Skrabek, adding that Manitoba’s police watchdog organization has been notified and is monitoring.

Hours after the first incident, at around midnight, officers saw another vehicle police said was stolen near Portage Avenue and St. Mary Avenue.

While one police car began to follow it, another moved in from the front, trying to stop it at Broadway and Langside Street.

Police alleged the driver of the stolen vehicle hit the gas and crashed into the passenger side of one of the police cars, then drove onto the sidewalk around the car before ending up on Broadway, where it crashed into the second police car. 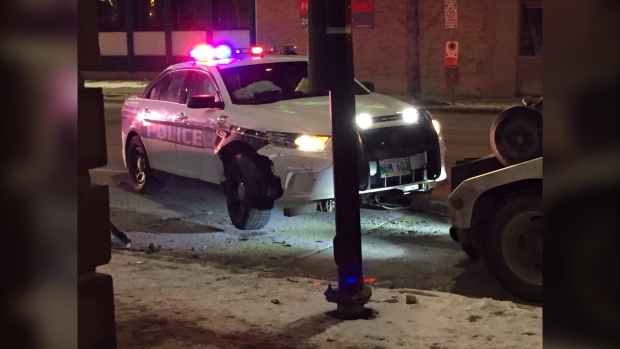 A police cruiser with damage to the front-end at Broadway and Langside. (Source: Gary Robson/CTV News)

Police chased two suspects who ran from car and said two officers were hit with bear spray in the process.

One suspect was arrested near Broadway and Furby Street and a second in the 200 block of Furby, police said.

Officers used a taser on the second suspect, saying he wasn’t giving in to demands.

Both suspects and two officers were taken to hospital and all have been released.

VEHICLE SWERVES AFTER DRIVING HEAD ON TOWARD POLICE

Police said the other incident took place at around 5:55 p.m. Monday, when officers with the guns and gangs unit were in the Bridgewater Forest area on another matter.

A vehicle police said was “operating in a suspicious manner” was followed by officers into a parking lot, when it made a u-turn and drove head on towards police.

It swerved and hit garbage cans instead.

The crash pushed the cans into the police car, hard enough that it was also pushed it a short distance, police said.

Officers have not yet located the vehicle or the driver involved. The major crimes unit is investigating.

Skrabek said the three incidents aren’t related, but they are having an impact on officers.

“It’s a case of increased awareness. Knowing that this is the level of violence that offenders are willing to escalated to,” she said.