Police investigate hateful graffiti outside home of refugees, while signs that newcomers are welcome pop up in city

Winnipeg police are investigating hateful graffiti on a fence outside the home of Syrian refugees.

Mannan Hamrasho came to Winnipeg with his wife and two kids in February and lives at the property where the messages appeared.

"Canada is good. This is not good," he said.

"Go back to your country. Leave Canada," reads one of the messages.

Hamrasho discovered the writing Tuesday. He said police officers came by to have a look and took pictures.

Winnipeg police tell CTV News the major crimes unit and other units are investigating the messages, as well as possible threats against people living in the homes at the property of the fence.

Hamrasho said there are six families living at the property, located near the corner of Dufferin Avenue and McGregor Street. He said some of them speak Arabic, and his family speaks Kurdish.

Hamrasho used a chisel to scrape off the graffiti on Wednesday afternoon.

In an effort to combat negative views about people from different parts of the world making Manitoba home, some Winnipeggers are putting up signs on their lawns and in their windows to welcome newcomers.

In the Exchange District, Warehouse Artworks owner Rod Sasaki put a sign of a woman wearing a hijab with the words ‘Everyone is welcome here’ in his storefront. 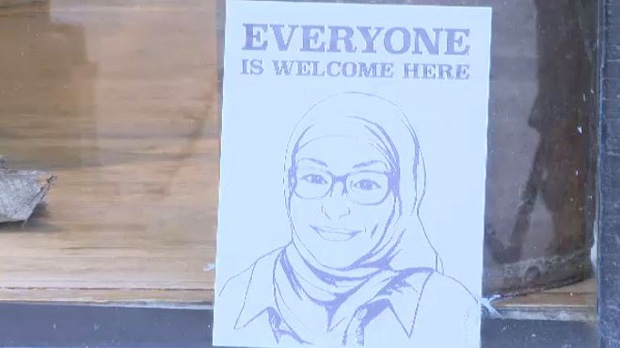 Sasaki said he’s noticed an increase in ignorant views and wanted to do something about it.

DeGroot wants the signs to remind people in English, French and Arabic, no matter where you're from, you are welcome here.

"When I put this sign up, I'm thinking about newcomers to Canada, but I’m also  thinking about people in Canada who are scared of new people coming in, of the changes that might bring,” she said.

“I think there's a small minority of Winnipeggers that's don’t want them here, want them to feel afraid. Not a heck of a lot I can do that, but this is one way I can say you have my support," said John Simpson, who lives in St. Norbert and purchased a sign.

Each sign costs $10.00. She said each one costs $5.00 to make. The rest of the money from the sale is being donated to the Manitoba Interfaith Immigration Council, also known as Welcome Place.

You can learn more about the signs here.