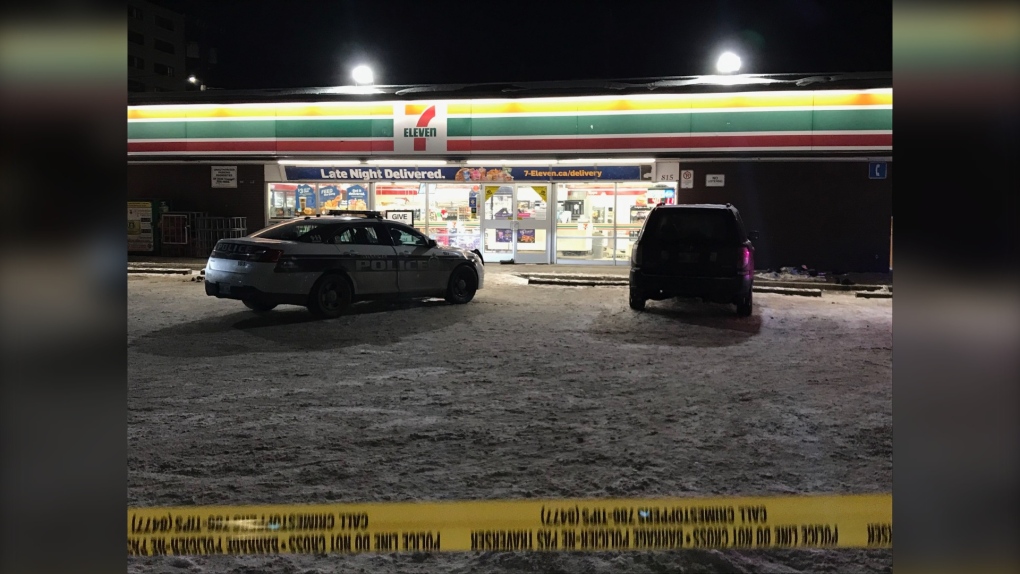 There is a heavy police presence at a 7-Eleven on Arlington Street and Ellice Avenue. (Source: Josh Crabb/ CTV News Winnipeg)

WINNIPEG -- Manitoba’s police watchdog has cleared the Winnipeg Police Service in the shooting of a 16-year-old following a robbery at a 7-Eleven last fall.

The Independent Investigation Unit (IIU) released its report nine months after the shooting, which occurred at the convenience store near Ellice Avenue and Arlington Street on November 21, 2019.

Officers responded to an attempted robbery, after receiving 911 calls that a male armed with a machete was trying to rob the 7-Eleven.

According to the report, when police arrived they saw the suspect inside wielding a large knife or sword. He then left the store and walked directly toward an officer with the weapon raised over his head.

The report said the suspect ignored demands to drop the weapon, and a taser was used, “but had no observable impact.”

According to the IIU, the male proceeded to “within two to three feet” of the officer and “began to bring the weapon down toward the officer’s head.” The report said it was at that point the officer opened fire, hitting the suspect five times. The male fell to the ground, and police performed first aid until paramedics arrived. He was hospitalized at the Health Sciences Centre, underwent surgery and was discharged in the middle of December.

The IIU said the male shot by police declined to meet with investigators, but a consent form releasing his medical information was provided. The IIU interviewed nine civilian witnesses, and 10 officers who witnessed the incident. The investigators also reviewed video recordings from inside the store, a traffic camera at the intersection of Arlington Street and Ellice Avenue, and a cellphone video from a civilian witness.

“The extensive investigation and thorough review of evidence clearly indicated the actions of the subject officer were appropriate to the situation, and the use of potentially lethal force was necessary, justified and unavoidable,” the report said.

The IIU said the investigation is now complete and the matter is closed.