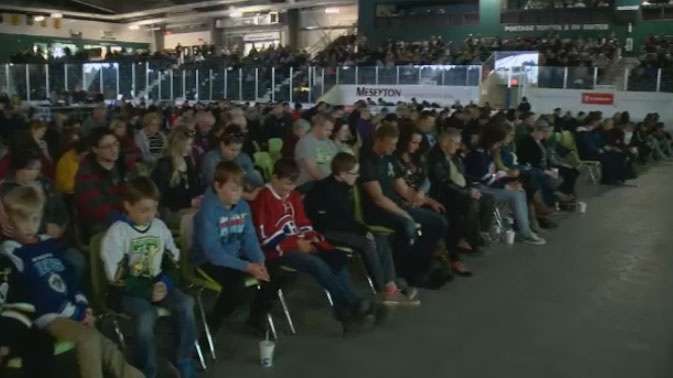 Money for the Humboldt Broncos Memorial Fund was raised through admission and t-shirt sales.

Portage la Prairie and Humboldt have a decades-long hockey rivalry. But the competition was put aside Wednesday for a fundraiser that included prayers and a moment of silence as a tribute to the team.

Money for the Humboldt Broncos Memorial Fund was raised through admission and t-shirt sales.

Paul Harland, the event co-organizer and assistant coach of the Portage Terriers, said the team has travelled “many miles” by bus to Humboldt.

“It’s a great community,” he said.

“And we just felt there was a deep connection with Humboldt and we want to, in some small way, maybe help in their healing process.”

The RCMP is set to address the media today in Regina to give an update on the status of the investigation into the Humboldt Broncos crash.