Possible changes to Wellington Crescent as an 'Open Street' for cyclists

WINNIPEG -- Changes could be coming to limit cyclist and pedestrian access to one of Winnipeg's most "Open Streets" routes, Wellington Crescent.

Currently, Wellington Crescent, from Academy Road to Guelph Street, is open to cyclists (and pedestrian using the median walkway) from 7 a.m. to 9 p.m., seven days a week, part of the expanded access to Sunday/Holiday Bike Routes program put in place in response to the pandemic. Motor vehicles are limited to one block of access under the same timeframe.

Linda Nugent, who lives along the stretch of Wellington Crescent, says there are some safety concerns for homeowners and cyclists alike.

"When you're backing out on to a street you have to be so careful as the driver," said Nugent, "But also the people on the street have to be just as vigilant."

Nugent is generally in favour of maintain cyclist and pedestrian access on Wellington Crescent.

"It’s really a matter of figuring out what is the safest for everyone in our community," she said.

Other homeowners, however, want to see immediate changes, some describing the limited access to cars on Wellington Crescent as form discrimination.

A collection of letters and statements put to the public works committee outlines the concerns of some homeowners, like Brent Trepel, who wrote that the current setup is a "human rights issue" that "favours able bodied cyclists to the detriment of people who are unable to ride bikes but can only enjoy the street by motor vehicle".

Gail Asper wrote that it is it is "simply unfair to ban all vehicles from having any opportunity to experience Winnipeg’s most beautiful street" and that the prioritized access to cyclists is "discriminating against thousands of Winnipeggers."

Brenlee Carrington-Trepel, who collected statements from homeowners, declined an interview with CTV News.

Some homeowners said that they have been verbally assaulted by cyclists for trying to get in and out of their driveways.

The public works committee did agree to request the removal of Wellington Crescent (and Kings Drive from Kilkenny Drive to Patricia Avenue) from the list of Sunday/Holiday Bike Routes, which will next be put before the executive policy committee.

The discussion was originally started by a motion submitted by area councillor John Orlikow, which intended to only allow the public works director, with input from the relevant city councillor, to change the times and dates pedestrians and cyclists can access bike routes like this stretch of Wellington Crescent. 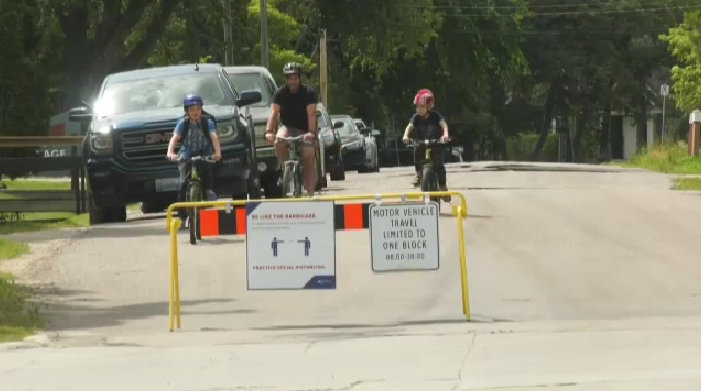 Orlikow said the motion was all about providing flexibility as the economy starts to reopen in the months to come.

“When we get to Code Orange, do we need to adjust it? I would say we probably do,” said Orlikow on Thursday.

But Orlikow said he wanted to wait until usage data, outlining who is using the street and at what times, came before any actual changes were implemented to Wellington Crescent.

He is also aware of altercations between cyclists, pedestrians and motorists.

Some pedestrians and cyclists who use Wellington Crescent certainly want to maintain the current level of access afforded to them.

Vic Keller uses the bike route almost every day and wants to see it kept open to cyclists.

"It needs to be kept open so that we can utilize seven days a week," said Keller. "It’s incredible to be able to get out and enjoy our city area like this."

"I really like it the way it is now," said Ewer. "I’ve grown up in this area where it’s usually been Sundays and holidays and I see how much use it’s getting."