The weather agency said that it doesn’t have sufficient evidence yet to confirm the tornado, but meteorologists are investigating and looking for pictures of the suspected tornado or any damage it may have caused.

This news comes after a strong thunderstorm moved into Manitoba on Thursday night and into Friday morning. During this time, the storm brought large hail to several communities.

According to Environment Canada, Binscarth and Rossburn received baseball-sized hail that in some cases, broke windows and damaged sidings.

Those in Oakburn were hit with hail that ranged in size from golf balls to tennis balls, while Plumas and Clear Lake got toonie-sized hail.

Along with hail, the storm also brought heavy winds that reached over 100 km/h in some communities.

According to Environment Canada, Pilot Mound got winds as strong as 104 km/h, while in Russell and Clearwater, they reached 91 km/h. Manitou also experienced strong winds that got as fast as 89 km/h.

Those with information about the potential tornado in Binscarth or any severe weather event are asked to call 1-800-239-0484, email mbstorm@ec.gc.ca or tweet with the hashtag #mbstorm.

'IT CAME RIGHT AT US'

Darcy Kowalchuk was at his home in Binscarth when ECCC issued a tornado warning for the community. Weather radar appeared to show the storm would track north of Binscarth, so Kowalchuk went outside to see what was brewing.

That’s when he spotted what looked like a super cell cloud.

“The giant cell seemed to pause and then it made a little turn, and it came right at us. You could see it developing its structure as time went on,” he recalled.

As it approached, he said the wind rapidly switched directions and the temperature changed.

“We prepared to go to the basement,” he said.

Kowalchuk watched the storm pass from the basement window, initially thinking it would miss them.

“Then the hail was at the back end of it,” he said, estimating golf ball to baseball-sized hail fell for almost five minutes. 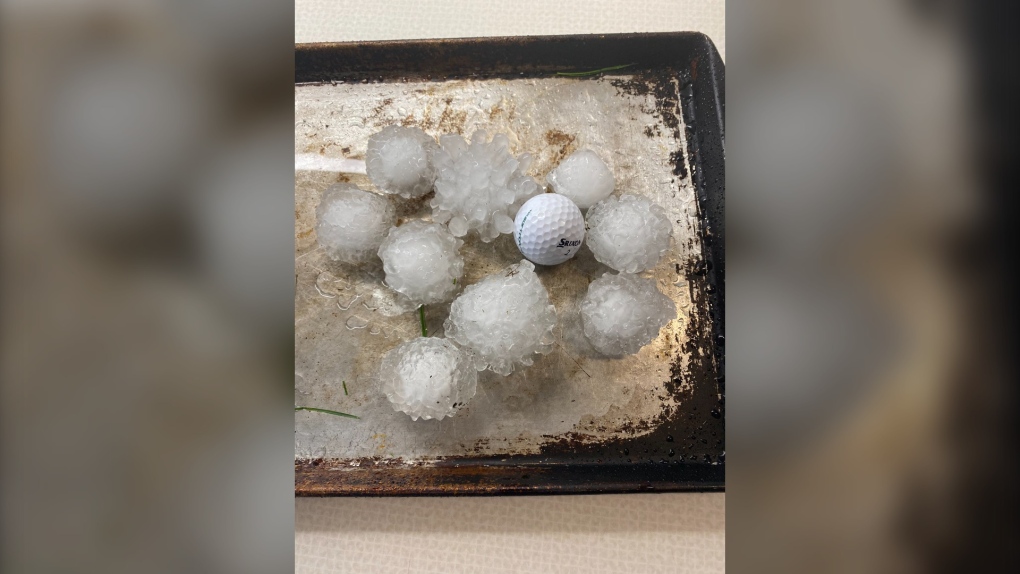 The hail made big holes on the siding on the north side of his home, plus it took out a plastic skylight and a camper window.

Kowalchuk said this is the second storm in five days in the area. He filmed them and others over the years and shared them on social media.

“Someone called me a storm chaser and I said, ‘well, that's not correct because I've videoed three weather events from my deck.’ It's not like I'm actually chasing them. They're chasing me,” he laughed.

Anne Heche on life support, survival of crash 'not expected'

Anne Heche is on life support after suffering a brain injury in a fiery crash a week ago and her survival isn't expected, according to a statement from a representative.

The August 'sturgeon moon' has passed over Earth: Here is what it looked like

Rising over beaches, buildings and statues, the last supermoon of the year created ample viewing and photo opportunities around the world Thursday night.