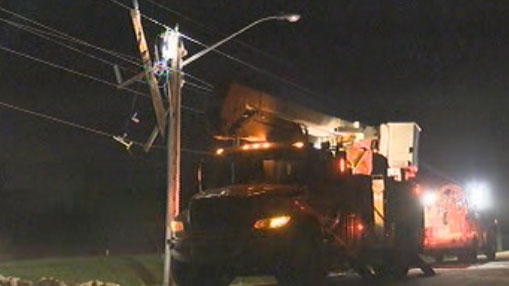 Manitoba Hydro said the source of the problem was a pole fire on Semple Avenue. It knocked out power in West Kildonan and River East.

This is the third widespread outage this year in the same area due to a pole-top fire.

The utility said pole fires are common when weather is damp but not rainy and most often occur in the spring.

Manitoba Hydro uses insulators made of porcelain and polymer to attach power lines to wood distribution poles. In humid weather, moisture in the air combines with dirt built up on the insulators, which causes an electrical short circuit that can start a fire and cut power to lines.

In some cases, crews can reroute power and restore it quickly; other instances require repairs to the original line.

Monday evening, it expected crews to restore power by 10 p.m.