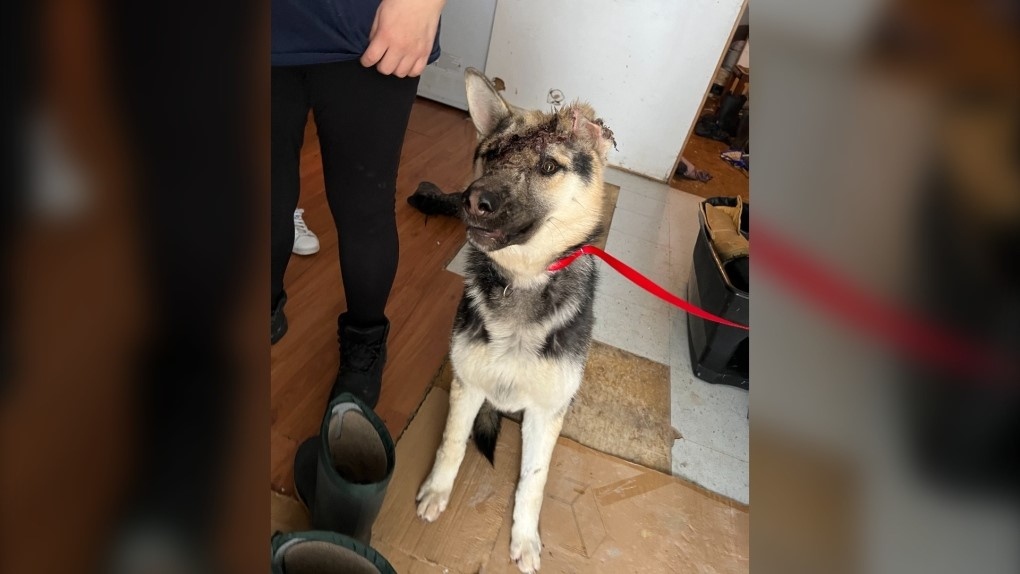 Isaac was rescued from a remote community in Manitoba and found with a hole in his head believed to be caused by a bullet or icepick. (Source: Manitoba Underdogs Rescue)

The Manitoba Underdogs Rescue (MUR) is calling on the public for help to save a dog that was found with severe injuries to his head and face.

Isaac is a one-year-old shepherd mix and was rescued over the weekend. When the organization found him, they said he had a hole in his head, around 1.5 to two centimetres wide and was missing most of one of his ears.

"We went up to a remote community on Sunday, we had some dogs to pick up there were being surrendered into our care and a bylaw officer in the community brought our attention to a dog that had an injury to his head, and the memo said that he had bone exposed," said Jessica Hansen, executive director of the rescue.

She said they were surprised at first that a dog that had bone being exposed would still be alive and thought the situation might not be as bad as they expected.

"But when we got there, it was terrible. His left ear was missing. The entire front of his face was just a wound. There was blood and pus and it just smelled so terrible."

Hansen believes Isaac's injury happened from either a bullet or an icepick and said it is probably one of the worst injuries she has ever seen.

"Especially when you think about the intent, the force and the violence behind an intentional attack like this, it's pretty disturbing for our volunteers to have to cope with."

Despite the gruesomeness of his injuries, Hansen said they expect Isaac will make a full recovery, noting he is still a very happy, human-loving dog.

"I think the thing that baffled us the most with Isaac was his personality immediately … Isaac came running over to us at full speed, super happy. If you had seen him in the distance, you never would have known, you never would have guessed that anything was wrong with him. I mean, it was like (his injury) wasn't even there," she said, adding he is still kind of playful while receiving care and he wants food and treats.

As part of his treatment, Isaac is receiving IV fluids, antibiotics to get rid of the infection in the hole, pain medicine and the bandages are getting changed daily.

Once the infection is stabilized and improving, Hansen said he might also require surgery to close the hole.

The bills for all this care is why the rescue is putting out the call for help.

"So to start off with, the hospitalization and initial treatments, we're trying to get about $2,000 … and then if we're looking at surgery, we'd probably be looking at another couple thousand dollars."

The hope is Isaac is able to make a full recovery within one to two months, not including the surgery Hansen said.

Donations for Isaac can be made online.

DONATING TO ORGANIZATIONS TO SAVE ANIMALS

While the rescue is asking for donations to help Isaac, Hansen said donations in general throughout the year are important to keep the organization going.

This year, she said veterinary bills are averaging about $30,000 a month, which Hansen said has been steadily increasing since the pandemic.

"We have found that we're getting more and more dogs in general, whether they're injured or sick or not. It's just been very overwhelming this year."

Hansen understands several pet rescue organizations including MUR are asking for donations to help and said any donation to any organization is appreciated.

"A dog saved is a dog saved … we're all working towards the same goal, we want to help dogs in this province, whether it's locally or in some of these rural and northern communities."

She added if money isn't something that is possible, people can also look at becoming a foster or volunteering.