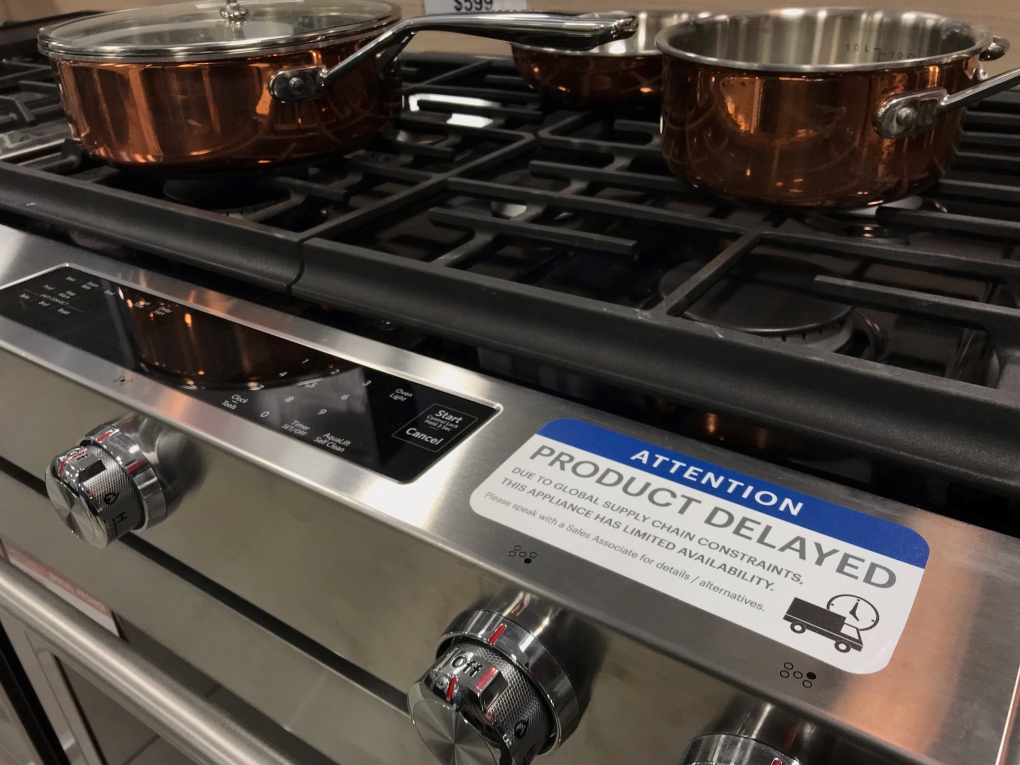 Supply chain disruptions amid the pandemic have pushed up prices for some big-ticket consumer products.

Last month, people paid more for vehicles and household appliances than they did compared to June 2020, according to a monthly Statistics Canada report on the Consumer Price Index (CPI).

With bottlenecks continuing to cause backlogs, there’s no immediate sign of improvement. That’s bad news for people in the market to buy the products.

“The fridge still works but the freezer’s gone so no ice cream. No ice cubes,” said Kathy Soke.

When she did, she expected it would take months to arrive.

“I was prepared to wait until about October,” she said.

Supply chain disruptions brought on by COVID-19 are making it harder to get most household appliances, according to Curtis Penner, general manager of Coast Appliances in Winnipeg.

“And we don’t expect them to get better for at least another year,” Penner said.

He said it has had an impact on all brands they sell—from fridges and freezers to stoves and ranges. The delays have been exacerbated by people spending more on their homes during the pandemic.

“Along with the high demand and then the shortages, supply chain issues—it just created chaos,” Penner said.

According to the latest release on the CPI, production bottlenecks, input shortages, higher shipping costs and delivery delays have pushed up prices.

It’s a situation Barry Prentice, a professor of supply chain management at the University of Manitoba’s Asper School of Business, expects will improve but not until after Christmas.

“What we’ve seen is a real shortage of computer chips,” said Prentice. “I think in part that’s because we’ve had a surge in demand for them but also there’s been some issues of production that’s been going on,” he added. “The automobile industry has been hit with this but also appliances.”

In June vehicle prices jumped 4.1 per cent compared to the same month last year, while household appliances increased 5.2 per cent, according to the CPI. Cooking appliances went up 6.3 per cent, laundry and dishwashing appliances 7.1 per cent, and refrigerators and freezers 9.8 per cent.

“And again all those costs get fed back into the supply chain and have to get covered by the consumer ultimately,” Prentice said.

While that may help with inventory, it hurts the bottom line.

“Anything to deal with the disruption tends to increase the costs of doing business and then ultimately will be reflected in pricing,” said Paul Larson, another supply management professor at the University of Manitoba’s Asper School of Business.

He said some manufacturers are feeling the impact on both ends.

“On the customer side or demand side there’s been disruptions, of course, there’s also been supply disruptions,” said Larson. “There have even been internal disruptions in terms of labour shortages. There’s lots of disruptions.”

Larson said they will find ways to get things through the supply chain but he noted some customers might get priced out of the market.

Penner said so far manufacturers and dealers have been absorbing increases on the products in his store but he doesn’t think it’ll stay that way.

“In the near future and probably in the new year you’ll see that deflected down to the consumer as well,” Penner said.

He said the best thing to do is order early. For Soke that wasn’t an option—it was an emergency replacement. But much to her delight a new fridge will be delivered Saturday.

Canadians Michael Spavor and Michael Kovrig were free and bound for home late Friday after being imprisoned in China for nearly three years, while Huawei executive Meng Wanzhou was heading in the other direction, her own legal saga ending in a deal with the United States.

China's government was eagerly anticipating the return of a top executive from global communications giant Huawei Technologies on Saturday following what amounted to a high-stakes prisoner swap with Canada and the U.S.