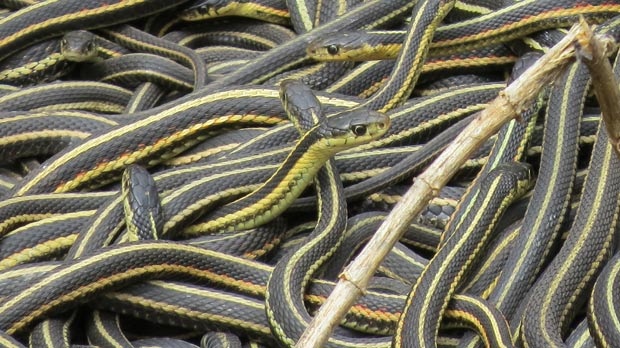 WINNIPEG -- A popular Mother’s Day weekend activity has been put on hold as the province announced the closure of the Narcisse Snake Dens to the public until further notice on Saturday.

In a tweet, the Manitoba government said the closure is needed to keep everyone safe.

To help keep everyone safe, the Narcisse Snake Dens will be closed to the public until further notice. Learn more at https://t.co/02dXhOEpwj. #StaySafe #Covid19MB pic.twitter.com/55dlzmDqIk

The closure comes during a busy time for the snake dens as the Mother’s Day weekend often coincides with the greatest mating activity for the snakes. According to the province, the end of April and the first three weeks of May are the best time to visit because the snakes are preoccupied with mating and are easily seen by visitors.

Mating balls can often be observed, where one female can be surrounded by up to 100 males. Narcisse hosts four active snake dens connected by a three-kilometre trail.

The public will have another opportunity to see the snakes a little later in the year. The garter snakes return to their dens in the fall and are visible until cooler weather forces them underground for the winter.

The Narcisse Snake Dens were also closed last year during mating season because of the pandemic.