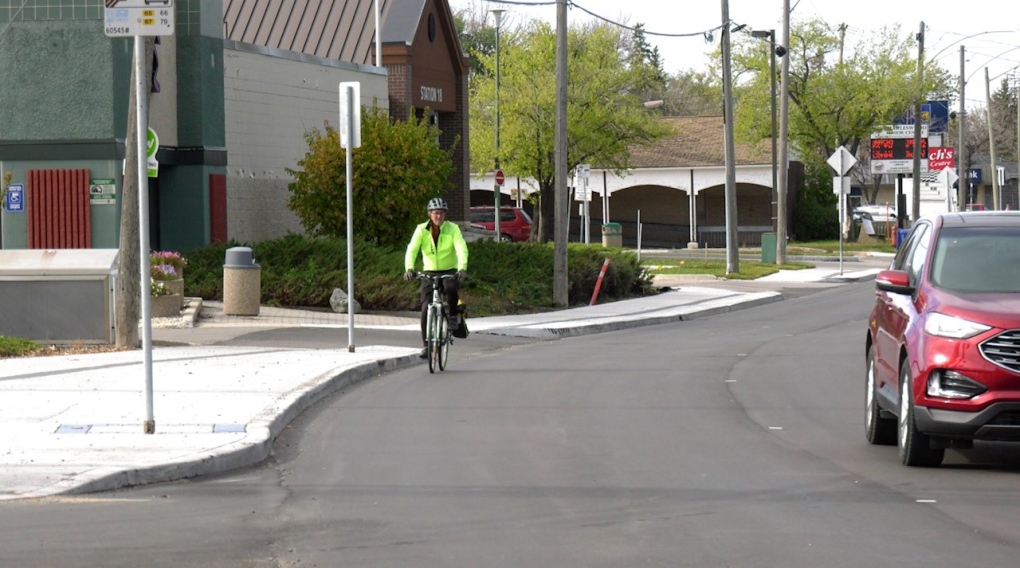 A series of motions made by a Winnipeg city councillor Tuesday aimed to beef up the city’s bike infrastructure.

Coun. Matt Allard (St. Boniface) argued the city should be investing money equivalent to 10 per cent of the road repair budget into active transportation and completing more projects at the same time as street construction work.

“I think what got my goat was that there were streets that were meant to be upgraded with active transportation through our road renewal program that weren’t done,” said Allard, who chairs the city’s infrastructure and public works committee.

“Twenty years ago I got hit by a car and I’m really reluctant to go on the road now,” Taylor said.

He takes the sidewalk during his cycling commutes on Roblin Boulevard because there’s no protected bike lane.

“We know there’s a little bit of a shortage on those things in Winnipeg,” Taylor laughed.

Instead, painted markings in each of the curb lanes, called sharrows, which leave little room for cyclists, remain in place. Some have faded so much they’re difficult to see.

“They just did some construction out there, putting in new roads and resurfacing and what not and they didn’t put in a bike trail,” Taylor exclaimed. “I couldn’t figure that out.”

Allard said that’s just one example of an area where active transportation improvements should’ve been tied in with road work in order to support Winnipeg’s climate action goals.

At Tuesday’s infrastructure committee meeting, Allard called on the city to include those upgrades as part of road renewal projects.

But his call for the city to allocate spending on active transportation equivalent to 10 per cent of the annual road repair budget, which is $152 million this year, failed—facing opposition from Coun. Devi Sharma (Old Kildonan) and Coun. Jeff Browaty (North Kildonan).

“In terms of the general traffic, it’s still such a tiny fraction of it,” Browaty said. “We live in a very car-oriented city and that’s going to stay the way it is … I mean winter weather, distances need to be travelled.”

Browaty argued the city is making improvements to active transportation and thinks greenhouse gas reductions will largely be achieved through improved public transit.

But active transportation advocates and some councillors say in order to reach the city’s target of having 50 per cent of all trips made by bike, transit and car pooling among other options by 2030 (a mode shift of 50 per cent), more work is needed to get thousands more Winnipeggers making single passenger vehicle trips to shift transportation modes.

“I think we have to look at a process that also looks at how convenient other modes of transportation are because I think people don’t want to be inconvenienced,” said Coun. Markus Chambers (St. Norbert-Seine River).

Taylor said with his rear bike basket and panniers, smaller shopping trips and certain commutes by bike are very doable no matter what the season. But he said better infrastructure would make it much more efficient and safe.

“If you just take a look at Roblin (Boulevard) here and you’ve got the little bicycle logo on the asphalt but really, you know, that doesn’t do anything for us,” he said.