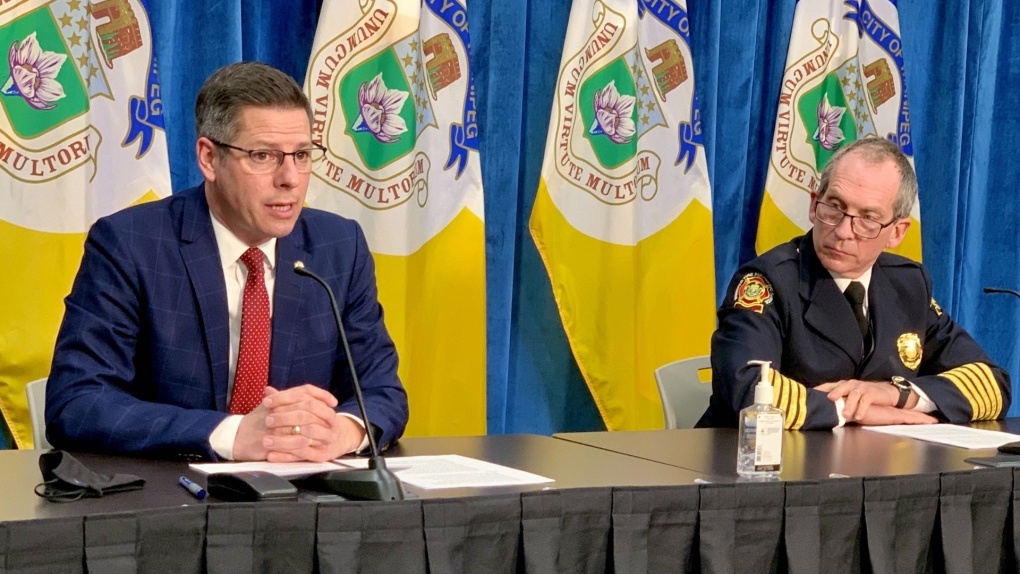 WINNIPEG -- A patient’s emergency medical transport was delayed when two city firefighters refused to help a paramedic who had previously raised concerns about alleged racist social media posts made by members of the Winnipeg Fire Paramedic Service, according to the findings of an investigation into respectful workplace complaints.

The complaints stem from the emergency response to a 911 call made by a 23-year-old Indigenous woman who was suffering from a self-inflicted stab wound to the neck. An ambulance with two paramedics and a fire truck staffed by four firefighters both attended the scene at around 4 a.m. on Oct. 7, 2020.

A report on the investigation, conducted by Laurelle Harris of Equitable Solutions Consulting, and obtained by CTV News Winnipeg, concluded there was a two-minute delay between the woman being loaded into the ambulance and the ambulance leaving the scene. While she survived, the report found a lack of concern for her physical and emotional well-being due to the presence of “implicit bias” because she’s Indigenous.

The report found a firefighter (the respondent) failed to help the paramedic (the complainant), who was requesting one of two firefighter/primary care paramedics on scene to accompany him in the ambulance prior to the patient being loaded into it.

Harris concluded this was in violation of the Code of Conduct and the Respectful Workplace Administrative Standard.

“The respondent’s (firefighter’s) failure to render assistance until he was ordered to do so by witness 1 (another firefighter) was more likely than not the result of personal animus arising from the complainant’s (paramedic’s) previous complaints of racism,” the report reads.

“The respondent (firefighter) did not prioritize patient care even though he possessed greater knowledge of the requests of the complainant (paramedic) for assistance than anyone else on scene that night.”

The investigation also concluded the second firefighter/primary care paramedic was aware of the request to accompany the ambulance but refused to do so due to “racial animus” towards the paramedic.

The investigator concluded the assertion made by the respondent firefighter and two other firefighters on scene that the delay was caused by the other firefighter/primary care paramedic returning medical gear to the fire truck and removing personal protective equipment doesn’t fall in line with video evidence and is false.

The respondent firefighter made a counter-complaint about the paramedic, alleging the paramedic was verbally abusive upon their arrival at hospital. The report concluded the paramedic apologized and took responsibility for his actions as required by the Code of Conduct.

The investigation included 26 interviews, a number of documents and video footage.

Michelle Gawronsky, president of the Manitoba Government and General Employees’ Union, which represents city paramedics, called the findings in the report “very troubling.”

“The investigator found that elements of racism, including resentment towards a paramedic who had previously raised concerns about racism, interfered with the care of a patient in a serious medical emergency,” Gawronsky said in an emailed statement.

Alex Forrest, president of the United Fire Fighters of Winnipeg, said the UFFW won’t be commenting at this time.

“This type of behaviour is not in line with the values and principles of the Winnipeg Fire Paramedic Service,” said Lane.

“There is absolutely no tolerance for racism or discrimination of any kind at the WFPS or the City of Winnipeg, either among coworkers or while serving the public. Any allegations brought forward are thoroughly investigated and followed up on.”

Lane wouldn’t say what, if any, disciplinary action had been taken, saying it is a private Human Resources matter. In terms of the confidential investigation report, Lane said it wasn’t kept private to hide the findings but because it was vital to the investigation.

“We need anyone involved in a workplace investigation to feel comfortable about speaking openly about their experiences without fear.”

Lane said the WFPS had planned to release a summary of the findings.

In the weeks ahead, Lane said 200 frontline leaders will be required to participate in anti-racism and diversity training.

“Additional anti-oppression training is planned for all other employees, and the WFPS has hired two consulting firms to assist with a workplace cultural assessment aimed at getting honest feedback from employees about their experience working at WFPS.”

Part of the assessment will include surveying employees.

- With files from CTV's Stephanie Tsicos.