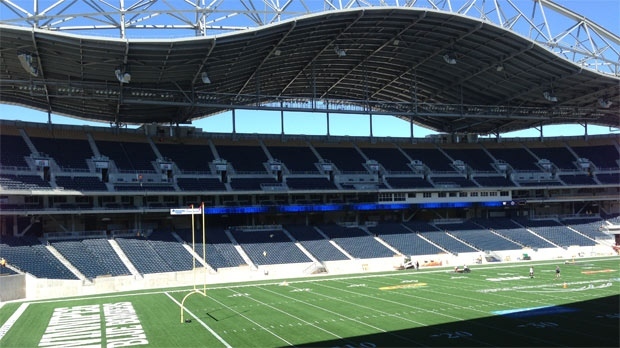 A Royal Canadian Air Force (RCAF) plane is set to fly over IG Field on Thursday.

In a news release, the RCAF said a CT-142 from the 402 Squadron of 17 Wing Winnipeg will be conducting the flyby for the Winnipeg Blue Bombers’ Canadian Armed Forces Appreciation Game.

The first flyby will take place at 7:33 p.m. at the end of the national anthem, with the second flyby taking place at 7:38 p.m. just before kickoff.

The plane will fly over IG Field at an altitude no lower than 500 feet above the highest obstacle of the route.

The RCAF notes that flybys are carefully controlled for public safety, and dependent on weather and flying conditions.

The Blue Bombers are reminding fans that city road work is taking place around the stadium on University Crescent. This will limit traffic to two lanes in either direction.

Fans are encouraged to arrive early to the game, and consider alternate methods of transportation, which include the Winnipeg Transit Park and Ride, the Blue Bombers Park and Ride, as well as cycling, walking or taking the bus.

Those who are driving should check for traffic updates before heading to the stadium.