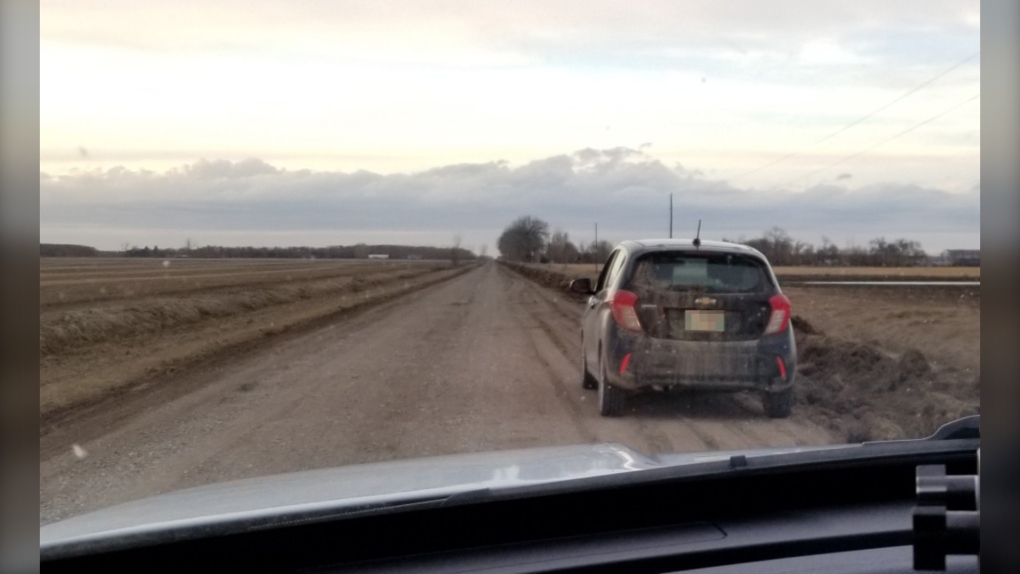 A RCMP dashcam photo shows a vehicle pulled over for driving at a high rate of speed on April 24, 2020. (RCMP handout)

WINNIPEG -- While the number of vehicles on the road has been reduced due to the ongoing COVID-19 pandemic, RCMP in Manitoba is reminding drivers they need to continue following speed limits.

“Even during the pandemic, motorists are reminded that police continue to watch for dangerous and reckless driving on the province's roadways,” the RCMP said in a release.

One instance occurred near Portage la Prairie at 8:10 p.m. Officers observed a vehicle travelling at a high rate of speed while patrolling the Trans-Canada Highway west of the city. According to RCMP, radar readings were recorded as high at 177 km/hour in a 110 km/hour zone.

When stopped, the 28-year-old male behind the wheel said he was tired and in a rush to get to the store and buy dog food and get home.

The man was fined $927 and issued a serious offence notice for a licence review with Manitoba Public Insurance.

Two other instances occurred within an hour in the Rural Municipality of St. Andrews.

At approximately 6:30 p.m., RCMP in Selkirk were observing a group of motorcycles travelling at a high rate of speed. According to RCMP, one motorcycle pulled away from the group and was clocked on radar travelling as high as 178 km/hour in a posted 80 km/hour zone.

The driver, a 50-year-old man from Winnipeg, was fined $1,333 for speeding and $672 for driving dangerously. The driver was also issued a serious offence notice for a licence review with MPI.

Officers also clocked a different vehicle travelling 150 km/hour in the same 80 km/hour zone. A 17-year-old from St. Andrews was fined $966 for speeding, and also issued a serious offence notice for a licence review.