Relaxed restrictions in effect for hair salons and retailers 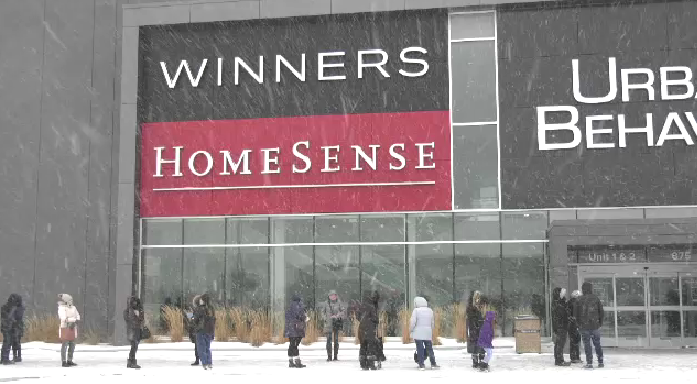 The day restrictions are eased in Manitoba, People line-up outside waiting to be allowed in the store in Winnipeg on Jan. 23, 2021. (Source: CTV News Winnipeg)

WINNIPEG -- For more than two months, code red restrictions have forced Manitobans to stick to the essentials, and for some businesses that meant closing their doors altogether.

But on Saturday, some were able to welcome customers again.

“It’s nice to be back and resume some normalcy, but I think everybody’s still on edge because COVID is still around,” said co-Owner of Harvest Barbershop Mason Melle.

His business was forced to close for five months due to COVID-19, and he was relieved to see the health guidelines loosening up.

On Thursday, the province announced it would be relaxing restrictions, with new public health orders coming into effect Saturday.

Melle said the limited capacity only enables him to serve one customer at a time, limiting the number of customers he can have in a day.

Into The Music, a new and used record store in the Exchange District, had people lined up outside for the first time in months.

“(Customers are) happy to be out and in a store again, just having the experience of going into a store and shopping, going through the bins and having that experience,” Morton said.

Into The Music received a lot of local support through curbside pickup during the lockdown, and Morton believes that support will continue as businesses start to reopen.

“I hope that same thing (can happen) for other businesses. Hopefully, restaurants and bars will start opening up soon too as well.”

Director of Government Relations Prairie Region for the Retail Council of Canada, John Graham, said the health orders in place in Manitoba were complex for retailers and consumers. He said the ability to reopen is a big relief.

“I think there’s a sense of hope, that this is the light at the end of the tunnel, the end of a nightmare,” said Graham. “Perhaps for the broader community and other sectors like restaurants, (there is a) sense of maybe we’ll get through this.”

Melle said his barbershop is open and ready to cut, but he believes the PC Government should have given more notice before relaxing the health orders. “We’re prepared and we have been practicing these safety measures for so long now that we’re comfortable.”