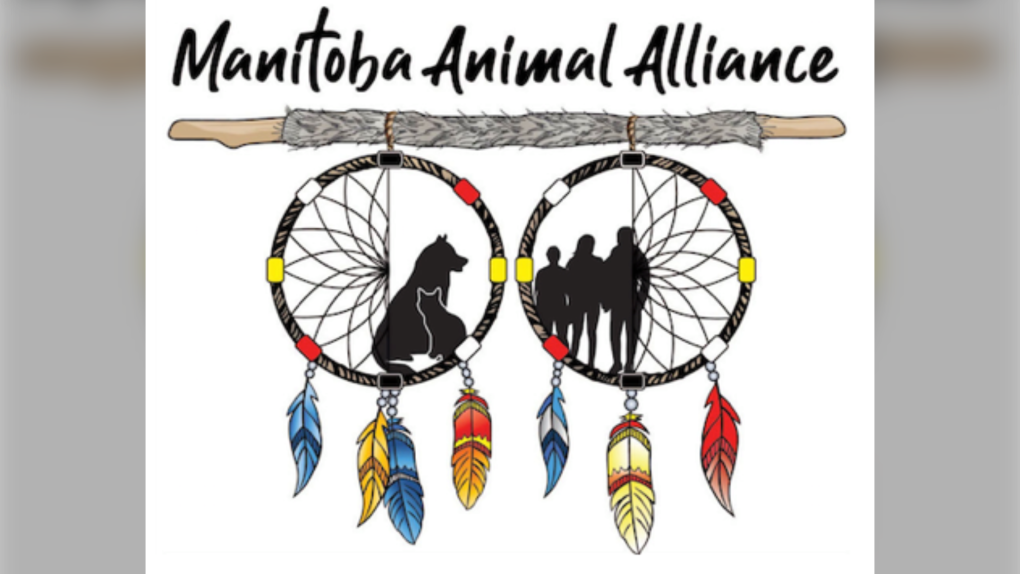 The Manitoba Animal Alliance logo. The organization is alleging a rescue organization in Ontario wrongly took a family's dogs during a recent rescue mission. (Source: Facebook)

WINNIPEG -- An Ontario dog rescue organization is being accused of wrongly taking a family's dogs while on a rescue mission in Cross Lake First Nation and putting them up for adoption.

During a joint rescue mission back in June, Manitoba Animal Alliance and Lost Boys Hope assisted in the removal and rehoming of over 100 dogs, two cats, and a guinea pig from the northern Manitoba community.

Among those animals, were a family's two dogs, a German Shepherd named Kujoe and a Labrador Retriever named Sammy.

In a statement on Facebook, Manitoba Animal Alliance said, "Kujoe belongs to a family that includes an 11-year-old girl who has been pleading to get her pet back."

The post goes on to accuse Ontario-based Lost Boys Hope of Barrie of wrongly keeping the dog.

"We have been working with the families and the community in an effort to get these dogs returned," said Rebecca Sands, president of the Manitoba Animal Alliance in the post. "Sadly, Lost Boys Hope has refused to return the dogs even though they know they were taken in error."

In a statement to CTV News, Kelly Ward, the founder of Lost Boys Hope, said the dogs are not being withheld.

"Community members were told of our arrival and departure time to enable them to tie or keep dogs inside and/or come to collect dogs possibly picked up at our staging area," said Ward in the statement. "We even released dogs back to owners when they had signed surrender forms and changed their mind."

Ward believes that the German Shepard in question isn't the right dog.

"We realized there was an identification issue as multiple dogs were being fingered incorrectly as the dog in question, on our Facebook page and through conversations with the family," wrote Ward.

"We have repeatedly asked the families and the liaison to identify the dog," she continued. "We have offered on several occasions to have live video and photos sent to the family to help rectify the situation."

Ward said the dog would be returned as long as the family can accurately identify it.

"If he is the dog in question, obviously he was taken 'wrongly' but that is not a case of stolen with intent as being suggested," said Ward's statement.

REFUSING TO RELEASE THE DOG

The Manitoba Animal Alliance disputes claims that the dog hasn't been properly identified.

"Sammy, the young chocolate lab, was also identified by its owners because of its pink collar," said the MAA in its Facebook post. "Lost Boys Hope initially agreed to return the dogs but has since refused to take action. It compounded the problem by having Kujoe and Sammy formally adopted after learning of the mistake."

Ward, however, said the chocolate lab needs medical attention before being returned.

"We are requesting this dog stay here, and we will eat the costs of the medical treatment already performed and yet to be," said Ward in her statement. "This dog needs medical testing to continue, and that won't happen if sent to a rural area with no ability to reach a licensed veterinarian."

Ward said her organization is trying to do what's best for the dogs.

"What's important is working together to find solutions. We seem to be the only willing to do that," she wrote. "We have left communication open and will continue to work openly and professionally outside of social media."

MAKING SURE IT DOESN'T HAPPEN AGAIN

"Mistakes happen. We have apologized to the families and the community. This is the last thing we want to happen," said Sands on behalf of the Manitoba Animal Alliance. "We have tightened up our procedures to make sure we don't have this happen again. The bottom line is that these pets should be returned to their homes."

"It's a shame time, and time again, I am seeing dogs missing after rescues have been in there," stated Ward. "We need a foolproof system across the board to prevent these mistakes again."

Ward outlined the protocols that should exist, and according to her, weren't followed by the Manitoba Animal Alliance in Cross Lake.

First, a rescued dog's photo should be taken and posted on the missing dog Facebook page. If no one steps up, a community member can then identify the animal as stray and sign the surrender. Ward noted that it was this step that was not followed in June.

Ward believes the Manitoba Animal Alliance "pushed the mobs" on Lost Boys Hope and is trying to redirect the blame in this situation.

As for the Manitoba Animal Alliance, it said it would no longer be conducting business with Lost Boys Hope.

CTV News reached out the family who allegedly owns the dogs, but has not heard back.