Residents push back over proposed luxury apartment on Shaftesbury

Residents push back over proposed luxury apartment on Shaftesbury 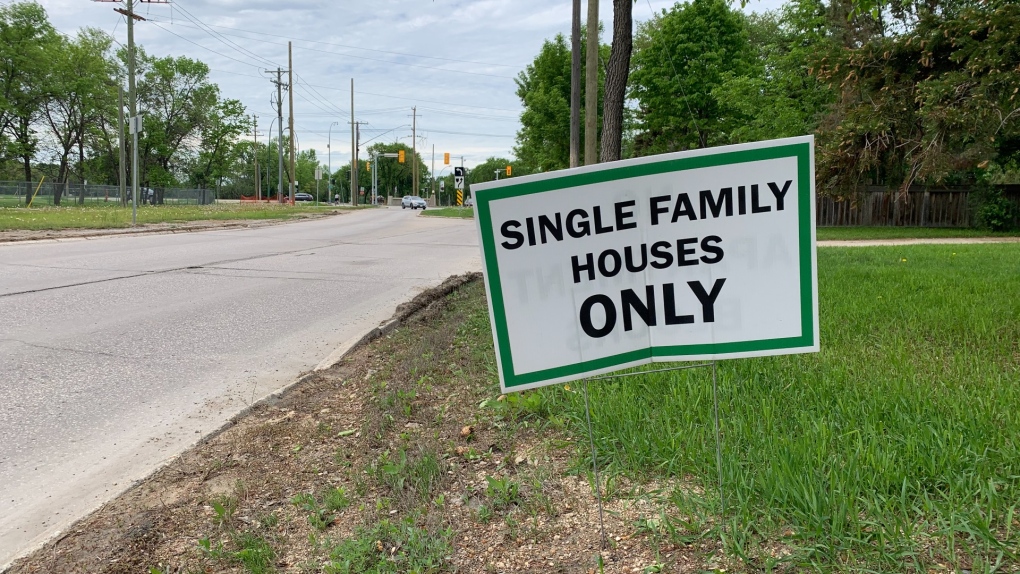 A sign saying 'Single Family Houses Only' is seen on Shaftesbury Boulevard. Residents of the neighbourhood are protesting the proposed development of a luxury apartment in the area (CTV News Photo Danton Unger)

Signs scatter the sprawling front yards of the homes along Shaftesbury Boulevard.

'Single family houses only' and 'No apartment blocks' are among the messages aimed at passersby – an effort by a group of area residents to stop a proposed luxury apartment complex from going up across the street.

Cheryl MacInnis has lived on Shaftesbury Boulevard for more than 20 years. She is among the group of residents who have posted the signs against the development.

"First of all, it's completely out of character with our neighbourhood," she said.

The proposed plans at 490 Shaftesbury Blvd. would see three high-end luxury rental buildings erected on the land, replacing the current single-family home that was built in 1978 and still stands there today, most recently operating as a care home facility. 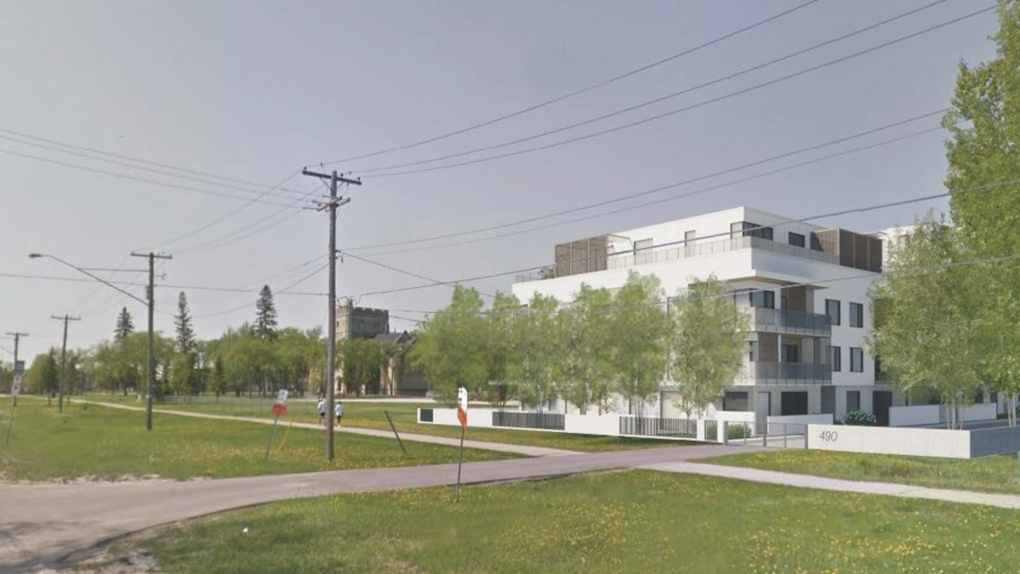 A rendering shows a proposed development of a luxury apartment in the Shaftesbury area (Submitted photo: Private Pension Partners)

The land in question is neighbouring the Tuxedo Golf Course and the Canadian Mennonite University. It was recently purchased by real estate management firm Private Pension Partners, which is looking to redevelop it.

For the development to move forward, the land, which is currently zoned as park and recreation land, needs to be rezoned for residential multi-family use – another concern for residents who fear the development will lead to increased traffic and replace green parkland with apartment blocks.

The residents aren't the only ones concerned – the Canadian Mennonite University has spoken out against it. In delegations to the city, the university said the development is inconsistent with the university's provincial heritage site designation which includes protected sightlines of its castle-like building.

The pushback is not a surprise for Donovan Toews, managing partner at Landmark Planning and Design, the planning firm for the project.

"Whenever you propose pretty much anything new in an existing neighbourhood – that's what infill development is – it can be quite challenging," Toews said. "People are quite concerned about changes in their neighbourhood, and that's certainly fair enough."

Toews said the city's new infill guidelines are part of the reason the developer has set their sights on this land.

In June 2021, the city adopted new infill guidelines outlining a goal for infill development to make up 50 per cent of all new builds in existing built-up areas of the city.

"We see cities evolve over time, and so that inevitably means there is something going to change around someone at some point in time," Toews said. "We need that open-mindedness if we're going to grow on an infill basis in Winnipeg."

However, Councillor Kevin Klein (Charleswood - Tuxedo – Westwood) said this is not the type of infill housing he thinks the city needs.

A sign saying 'No Apartment Blocks' is seen on Shaftesbury Boulevard. Residents of the neighbourhood are protesting the proposed development of a luxury apartment in the area (CTV News Photo Danton Unger)

There is one thing both MacInnis and Toews agree on – for residents wanting to stick with the status quo and a developer uninterested in building single-family homes, finding a common ground between them is unlikely.

"We're definitely not anti-density," MacInnis said. "We just don't feel this is the right place for it. There's nothing like it around here."

Private Pension Partners declined a request for an interview, saying, "As a private company, we have no further comment."

The applications for the development received first reading at council in May. While the applications still require second and third reading, Klein said they may face an appeal or challenge.

ORGANIZATION IN SUPPORT OF PROPOSED PROJECT

At least one local organization is in support of the proposed development. Yes In My Backyard (YIMBY) Winnipeg released a statement Monday, calling the development “a step in the right direction” for the city.

“It contributes to a diversity of housing choices in the city options for folks who don't want to maintain a large home anymore,” ,” said spokesperson Dylon Martin.

“It provides an option for them to find new accommodation in their neighborhood. It facilitates a more compact urban form that leverages existing infrastructure while generating tax revenue for city services, and it's in a pretty strategic location with the Grant Avenue frequent transit route being part of the transit master plan that council adopted last year.”

Martin said he is concerned about the rhetoric surrounding the proposal and the signs being displayed on some yards against the project.

“It shows an attachment to a type of rigidly exclusionary zoning,” he said. “(That) there's only one type of house – single-family - that's allowed here. And that's really, I'd say, an outdated way of looking at cities.”

Over 400,000 Maritimers still without power in Fiona's wake

Strong winds and heavy rainfall from Fiona have left over 400,000 Maritimers without power, as of midnight Sunday.

North Korea on Sunday fired a short-range ballistic missile toward its eastern seas, extending a provocative streak in weapons testing as a U.S. aircraft carrier visits South Korea for joint military exercises in response to the North's growing nuclear threat.