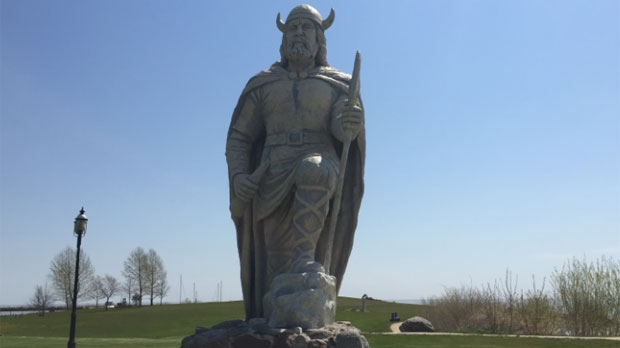 Built in 1967, the Viking statue was designed by Gissur Eliasson.

WINNIPEG -- In a first of its kind for the municipality, the RM of Gimli is forming a committee whose sole purpose is for reconciliation.

The roads in question were at one time a single route, but as communities expanded and the land use changed the road was broken up into sections.

“That word colonization is just a memory of the genocide that was taken place against the Indigenous people of Canada by all these settlers,” said area councillor Cody Magnusson. “It’s a word that for so many people, not only Indigenous people, but anyone that understands that history can and should find deeply offensive for what it represented in our history.

Last week, RM of Gimli Council approved a motion put forth by Magnusson to form the reconciliation committee. It followed a petition started by a local businessman, signed by about 1,000, people asking for the names to be changed.

Mayor Lynn Greenburg said the issue has been raised before, but in light of the recent discovery of the remains of 215 Indigenous children near a Kamloops residential school, the issue gained traction. He said council is in favour of changing the road names, but is waiting on the committee’s recommendations.

“Some people say don’t touch anything, just leave it the way it is, there’s nothing wrong with it, others say it should be changed,” said Greenburg.

The committee has yet to form, but Magnusson was surprised by how many people have volunteered to take part.

“My goal for the committee is to have a balanced mixture of representatives from the Indigenous community, both locally and maybe some organizations from the surrounding area, as well as non-Indigenous members from the community,” said Magnusson.

The roads will be renamed in the spirit of reconciliation, according to Magnusson, and in keeping with local Indigenous history.

The RM of St. Clements is in the middle of a similar process, and will help serve as a guide for the new committee.

Once the name recommendations have been finalized, the committee will move on explore any other opportunities in the spirit of the calls to action from the Truth and Reconciliation Commission of Canada.